The Ascension into Heaven of Saint Dozois 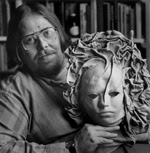 Have you heard?  Gardner Dozois is being inducted into the Science Fiction Hall of Fame.  He is now as one with  (I presume; I haven't actually checked the lineup) Isaac Asimov, Robert A. Heinlein, John W. Campbell and Eando Binder.

How Gargar's friends will bust his chops over this one!

In honor of the occasion, allow me to post an excerpt from an interview I did with Gardner for Capclave on September 29, 2001.

What can you tell us about the time when your mother took you to watch the world come to an end?

Gardner Dozois: Well, she did.  My mother was a sweet lady, but she had a very tenuous grasp on reality.  She never had much, in fact never had any formal education.  So she tended to get things wrong.  There was a major hurricane that went through Massachusetts when I was, oh I don’t know, maybe four, somewhere in that range.  And something which she heard on the radio gave her the mistaken impression that  the moon was about to fall out of orbit down on top of the Earth and destroy the Earth, and that this indeed was the end of the world.  So her reaction to this being the end of the world –
And I never quite understood this – was to bundle me up and rush out into the hurricane, and this was a major-league hurricane with trees falling like matchsticks all around us and electric wires falling down and spitting in the street, we’re talking a heavy-duty disaster here.
So we rushed out into the storm and she rushed down to the ocean side, and we waited there for the moon to crash into the Earth and the Earth to come to an end.  And of course I had just been told by my mother that the world was coming to an end, so I believed it.  We huddled there on the shore and watched huge waves crash into the rocks and waited for the moon to get up and eventually we got tired of doing this and went home.
My mother was prone to this type of thing.  She also had a story which was famous in the family that her brother had once walked on the water.  This had been in the paper, but then the bishop hushed it up.  So they didn’t talk about it any more after that.  She also blew away once.  She told me distinctly that when she was a girl she was so skinny that she had been playing outside one day and she had  blown away, and she had blown for miles.  People were running after her and leaping up, trying to grab herfeet and haul her down.
Then there was the one about her having a conversation with a leprechaun on the golf course.  But this was pretty standard stuff.

My friend Mario Rups has kindly pointed me toward the website Omnivoracious, where Jeff VanderMeer has posted an interview with me about Dancing With Bears which, my publisher is eager for me to mention, will be published by Night Shade Books on May 1st.

In the intro, Jeff called my novel "flat-out brilliant, edgy, kick-ass work, featuring two of the narstiest most entertaining rogues in recent memory."  There's got to be a way to use that as a pull-quote.

You can find the interview here.  Or you can just to to Omnivoracious and poke around.


Above:  That photo was taken in my library.  I own that mask.  So who gets to look extraordinarily cool?  Gardner, that's who.  Is that fair?
Posted by Michael Swanwick at 9:32 AM

The camera LOVES Gardner. You know that.

Also, he really is cool.

That mask is definitely cool, though.