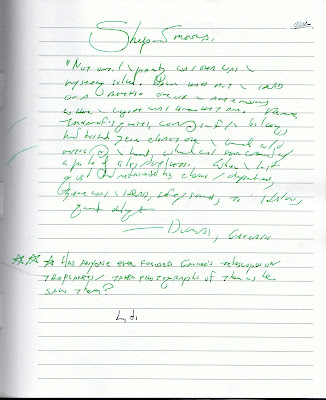 Shepherd Moons
Obviously, I was just realizing what a great title that would make.

And a great quote from an astonishing book of non-fiction:


Not until the party was over was the mystery solved.  Halim had put the head on a bench in one of the anterooms where the light was somewhat dim.  Prince Tarkanof's guests, coming in from the balcony, had tossed their cloaks on the bench without noticing the head, which was soon covered with a pile of silks and velvets.  When the last guest had retrieved his cloak and departed, there was the head, to Halim's great delight.

-- Dumas, Adventures in the Caucasus

* *  Has anyone ever focused Galileo's telescopes on the planets and taken photographs of them as he saw them?

Because they really should.

What those two letters at the bottom of the page are or might be is totally beyond me.

you write by hand?? on paper? stories or just notes?

Well, the beginnings of stories . . . I've got -- wait a second, and I'll couunt -- forty-seven stories that I've opened files for and begun writing. Most of them have been on hold for years, but I'd say about a dozen are being actively worked on as of this month. So I won't take a story to the keyboard until I'm sure it's something I want to write.

I've also got two large cloth-covered notebooks where I'm jotting down notes, fragments, and thoughts for my next two novels.

Man, I've got a lot of stuff I want to write! I've got to knuckle down and get disciplined about it.

I hear you! I have five novels in various stages of completion and a ton of short story threads. Got any tips on discipline? Do you jump around or finish one story straight through?

Strangely enough, yes. I do have a useful piece of advice:

The very most efficient times of production I've ever had were when I was simultaneously working on two pieces of fiction, one dark and negative and the other bright and upbeat. I'd work on the one until I couldn't face writing about yet another festering radioactive corpse and then switch over to the other. At which point I put on a great BURST of productivity.

Which lasted until I reached the point where I couldn't stand writing about yet another giggling, capering Smurf. And then I'd switch back to the negative story and experience another BURST of energy.

Since you've got a lot of material to work with, a little strategic scheduling of your material along those lines might well be useful.

Anyway, it's use a try. Good luck!

Neat idea; I'll give it a go! I don't write much upbeat stuff in my novels, but next time the going gets tough, I'll seek refuge in my satirical science stories. If it works, my blog won't die and my fiction will be inspired: double win!