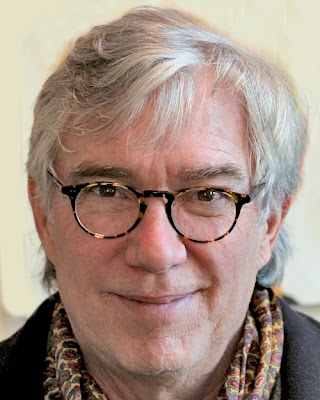 I've never actually spoken to Rudy Rucker, though I once had dinner with him.  He was seated at the far end of the table in a noisy restaurant, so there was no chance for a Major Literary Encounter that might someday be enshrined in the Oxford Book of Literary Anecdote.  But I do owe him him thanks for two separate favors he did me in the past.

The first was back some twenty years ago when I acquired my first computer with a genuine hard drive.  So long as I had this huge chunk of futuristic metal, I figured I might as well get so programs to run on it.  So I bought Word Perfect, a game of some sort, an astronomy program, and the software package that Rudy put together to go with James Gleick's then-best-seller Chaos.  Following the instructions carefully, I installed Word Perfect from the floppies.  Then, following the instructions, I typed WP: and return, and then run.

After a half-hour scouring the tech manual to figure out what went wrong, going from the index to internal chapters and then to the appendices and back again, I gave up and installed the next program, hoping for better results.  Same thing, followed by another long and fruitless crawl through the manual.  Then the next.  No change.  Finally, I went to the Rudy Rucker program.  And in the tech manual, which he wrote himself (I could tell, because it was written in clear and straightforward English), immediately after the installation instructions, he included the instruction line which everybody else had left out:


Change from the soft drive to the hard drive by typing c:
Immediately, I dropped his manual and booted up all the installed programs, one by one.  They ran perfectly.  Because Rudy Rucker was the only person writing manuals at that time who understood that there were things that were self-evident to any computer programmer which would not be known by a first-time user.

So, thank you, Rudy.

Sometime either before or after that, I finished a novel that I was having enormous trouble naming.   Eventually, I decided to call it Vacuum Flowers, but for a while there my agent (the late and dearly beloved Virginia Kidd) fixated on Wetware as a possible title.  Which was a good title.  But wrong, wrong, wrong for my book.

All my pleas and arguments were going nowhere when I read something in Locus indicating that Rudy Rucker was working on a thematic sequel to his novel Software which he planned to call . . .  you guessed it.

I immediately called up Virginia and said, "We can't do this to good ol' Rudy!  The man and I are like brothers.  He'd never forgive me."  And, reluctantly, she agreed.

So, thank you again, Rudy.  Thank you twice.

You'll remember I went to the Shadows of Gesualdo concert last week.  Tom Purdom was there as well, and he reviewed it for the Broad Street Review.    His big observation?  That the concert was proof that you should be very, very careful about what you post on the Internet.

You can find his review here.