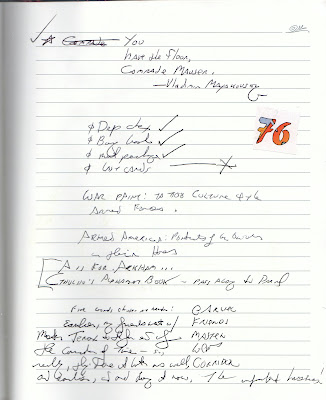 *  You
have the floor
Comrade Mauser.
-- Vladimir Mayakovsky

A terribly ironic poem.  Mayavkovsky was a violent true believer when he was young.  The Soviet government he supported so passionately crushed and destroyed him.

After a list of things to do, two of Kyle Cassidy's projects:

I don't think I ever got around to mentioning this idea for a chapbook to Darrell Schweitzer.  He'd be the guy to write it, though.


Earlier, my friends went with Master Terox to the far end of the Corridor of Time -- so, really, they'd done it later as well, and earlier, and are doing it now.  The impudent hussies!