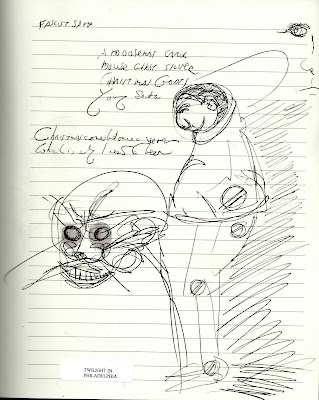 Two doodles (the skull's eyes have been augmented by two drops of wine) and possible titles/subjects for the Christmas story I tell my family every year on Christmas Eve.


A Moosemas Carol
Mouse Ghost Silver
Christmas Goats
Young Santa
I forget what the 2008 story was.  The very first one, told when Sean was a toddler, was about a mouse ghost, so obviously I was toying with doing a revision of that.  This past year I finally got around to telling A Chrismoose Carol and it was a big success.
And some light verse.  It was a heckuva year for light verse, apparently:

Christmas comes but once a year

Which is why I need a beer

The scrap of paper pasted at the bottom says TWILIGHT IN PHILADELPHIA.  I have no idea why.
*
Posted by Michael Swanwick at 2:49 AM