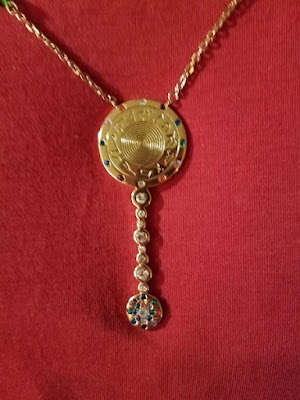 I brought home from China a pendant for Marianne. It was a gift from Jie Zhang, one of my writing students in the Future Affairs Administration writing workshop. That's it up above, in use.

The pendant, as you can see, is a lovely piece of jewelry and Marianne was very happy to receive it. As Jie Zhang explained it to me, the spiral at the center of the piece represents starlight, the symbols around it are the Chinese names for constellations, and the line of stones downward represents the starlight coming down to touch the Earth.

Jie Zhang has a store on Wechat, for those who use that app.  Here's (I think) the information for finding it. 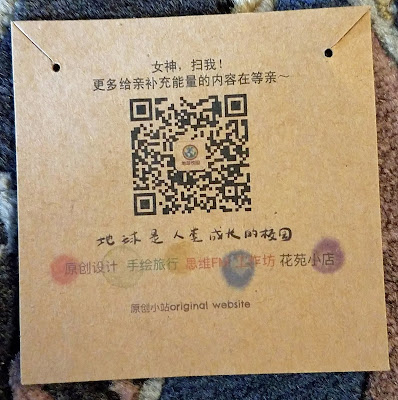 I'm on the road again. This time, I'll be in Iceland -- in part just to gad about, but mostly for Icecon, the national science fiction convention in Reykjavik.


More details as they develop. 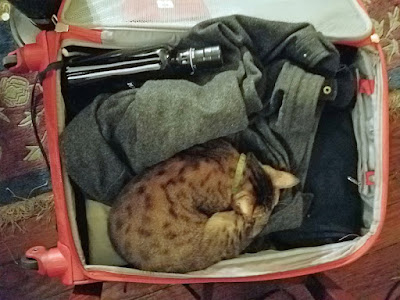 Above: As you can see, I've packed everything I need for a tip to the North: a sturdy coat, a sturdy bottle of Scotch, and a sturdy cat. 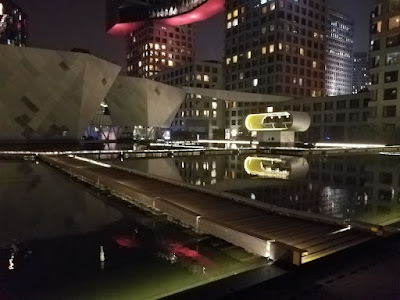 What a wonderful experience Beijing must be to an architect! The city is filled with strange and wonderful buildings. A skyscraper is going about its business when suddenly the windows ripple in strange patterns. Fifteen-story hotels have traditional green-tile roofs. Occasionally, as above, the city even looks like yesterday's science fiction.

What you're looking at is the plaza with reflecting pool in the center of a cluster of buildings, one of which houses the Future Affairs Administration, a publishing house that began, if I recall correctly, as a science fiction fan group. Today, it has some thirty employees and publishes both on the Web and in good old-fashioned books. And it's still growing!

Last week, I ate a fabulous meal in a restaurant on the plaza and then went to a bookstore event on the same plaza. What a rich world this is, and what a remarkable place is Beijing!

Oh, and that yellow thing to the right of center, above? It's a viewing room, where people can enjoy watching the future taking place.

There's another photo of it, from a different angle, below. 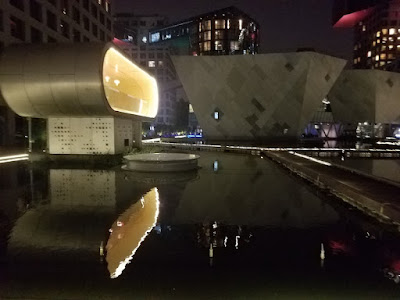 *
Posted by Michael Swanwick at 7:47 AM No comments:

Oddly Misguided and Possibly Not Even Art

.
There's a game I like to play on Facebook every now and again that I call Art or N'art? I have a fondness for challenging contemporary art and so when I'm visiting an institutional repository of such work, I'll take a photograph of something that might be art -- or, then again, might simply be a pile of crumbling bricks or some construction debris waiting to be hauled away. Then I'll challenge my friends: Is it art? Or n'art?

The answer, much like the Scarlet Pimpernel can be damned elusive.


Today I took a jaunt to 798 Art Zone, an old industrial neighborhood of Beijing that has been taken over by art centers and galleries and a swarm of parasitic cafes and shops. It was quite wonderful and I hope to return someday and spend a lot more time there. The Ullens Center for Contemporary Art had a major retrospective on Xu Bing, an artist I had never even heard of and now one of my favorites. I may write something about him here, if I can find the time.

I also went to see Muse, which is either a gallery or a show at the 798 Building. And here I find myself punked by my own petard. Art or N'art? Postmodern irony or misguided spectacle? I honestly dunno.

The exhibition consists of a series of room in which famous works by several great painters are projected on the walls... and partially animated.

Renoir's dancers slowly incline their heads toward and away from each other, seemingly caught in a nightmare from which they cannot awaken. All move heavily, sluggishly, as if trying (and failing) to escape the embrace of paint. Luncheon of the Boating Party rocks from side to side, people shifting in relation to each other, as if it were set not on a restaurant balcony but on a boat on a heavy sea. Watching it, I felt seasick.

Van Gogh's people, by contrast, only have to contend with the moving rays of a killer sun.

Gustav Klimt's The Kiss, blown up to fill a wall, suffers from daggers and confetti of light that flow down the image, giving it a kind of Hallmark romanticism, while little colored florettes dance about on the floor, doing their damnedest to distract the viewer from the original image.

A cat wanders through several of Matisse's jostling the bric-a-brac and complaining plaintively. As well it might.

Finally, a room titled Henry's Scissors strives to provide Matisse's cut-outs with a playfulness they already had. Bird-shapes flap, fronds sway, and snippets of blue assemble themselves into women.

Each room is accompanied by its own relentlessly chipper music.

So... Art or N'art? It certainly has the nervy chutzpah of much postmodern art. But if I had to guess (I wouldn't bet money), I'd go with N'art. I think it's a misguided attempt to "bring the classics to life," to make them accessible by turning them into spectacle.

But I could be wrong. Over at Grounds for Sculpture in New Jersey, there's a life-sized Seward Johnson sculpture of Luncheon of the Boating Party which is well on its way to the the thing I saw today.

Which is to say, I'm baffled. Maybe somebody reading this knows for sure? If so... you tell me.

Why Did the American Cross the Road?

.
Much is said about Chinese drivers. But they are models of decorum and circumspection compared to Chinese pedestrians who stroll into the traffic and across the road as if there were not cars coming from both directions and bicycles and electric scooters from all four. Following one's progress is like watching a single fish make its way from one end of an aquarium to the other. How, you wonder, is it possible they don't bump into one another?

Those riding electric scooters, meanwhile, seem to consider themselves honorary pedestrians. While some, women mostly, wait patiently at red lights, others zip on through, confident that such petty inconveniences do not apply to them. They also reserve the right to make right turns on red, left turns on red, and in fact pretty much any motion that occurs to them at the moment. In terms of behavior, bicyclists can be considered to be the scooters' farm team. Nobody takes them very seriously.

The only people who ever seem upset at any of this are those driving automobiles. A car toots impatiently at the old woman six inches from its bumper, who plods unhurriedly onward, never once looking its way.

The hostel cafe (the "Twoo Cuup") being closed this morning, I went across the street in search of breakfast. Every smallest thing is an adventure when you're in a foreign land. 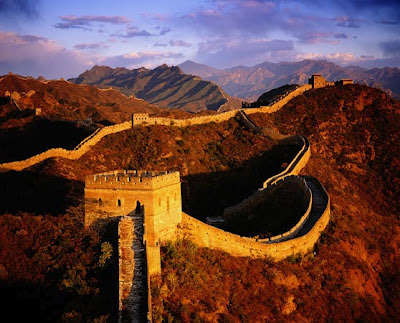 Greetings from Beijing! I'm here to teach two sessions of a writers camp for the Future Affairs Administration.  The first class was held yesterday and it seems to have gone well.

But let's step back a bit. Years ago, when he was trying to convince me to teach at Clarion West, the late and sorely missed Lucius Shepard said, "You gotta do it, Michael. It'll make you feel like Mr. Chips."

Now, anyone who knew Lucius -- a genuine wild man, if ever there was one -- will have to pause here to try to reconcile the image of him as Mr. Chips with the existence of a universe that makes any kind of sense at all. But when I finally did teach, I discovered what he meant. It's extremely satisfying to be of some use to new writers. They're all potential and good intentions. They deserve all the help one can give.

So it was here, yesterday. Vera Sun, who runs the program for the FAA and affiliated publishing house Guokr, told me that several of the students were published already, one of them with something like eight stories. All were serious, ambitious, intelligent, willing to work hard... everything you want from a new writer. I was greatly impressed by them. Vera also me that their emphasis is on big new ideas. Another thing I am very much in favor of.

Consequently, I'm looking forward to reading their stories. A decade ago, this would have seemed unlikely. But currently there's a lot of corporate sponsorship for SF in China -- a forward-looking literature for a forward-looking nation, you can imagine the discussions in the boardrooms. Part of this sponsorship takes the happy form of underwriting translations of selected works into English. So it's possible to get an idea of the shape of what's currently happening here, even if you can't read Chinese.

(Neil Clarke has been publishing translated Chinese SF stories in Clarkesworld every month. If you're curious, you should go check them out. Along with the rest of his excellent magazine.)

This is, as I've said before, a very exciting time for science fiction in China. They're building something new and, I hope, splendid. I'll have more to say on this matter in the future, I'm sure.

And, yes, teaching here did make me feel like Mr. Chip. Just don't tell anyone I admitted that.


Above: Yes, the Great Wall is outside Beijing and no, I'm not likely to visit it on this trip. But I've been there. One visit is all you really need. It stays in your heart.