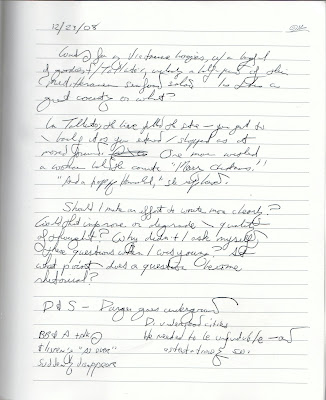 Waiting for my Vietnamese hoagies, with a bagful of goodies from Talluto's including a half-pound of their Mediterranean seafood salad.  Is this a great country or what?

In Talluto's, the line filled the store -- you got to the back of it as you entered and shopped as you moved forward.  One man wished the woman behind the counter "Merry Christmas."

"And a happy Hannukah," she replied.

Should I make an effort to write more clearly?  Would it improve or degrade the quality of thought?  Why didn't I ask these questions when I was young?  At what point does a question become rhetorical?

[I'm pretty sure I meant to write "simply" rather than "clearly."  But I simply wasn't clear enough.]


Followed by some notes for Dancing With Bears, which I was writing at the time . . . this would be when Darger and Surplus first hit Moscow:


D & S -- Darger goes underground.
D. understood cities
He needed to be unfindable -- and
ostentatiously so.
BB & A talking
and listening "as ever"
suddenly disappear.