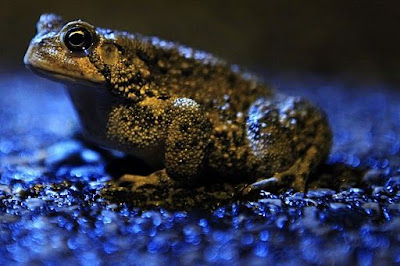 Yesterday, Marianne was interviewed at the Toad Watch by a local television station.  Exactly one sentence made it into the item, which was aired late last night.  She's been fielding congratulations ever since.

There's just something glamorous about toads, I guess.  The Toad Watch is getting covered by everything from the Roxborough Review to the Seattle Post Intelligencer.   You can read the SPI piece here.

The latest Ansible notes that Joanne Segal died on February 12 at age 93.  Ms. Segal posed for Lois Lane in the original Superman comic and married its co-creator Jerry Siegel.

So any new Superman comic book featuring Lois Lane will be necessarily a work of fiction.

I'll be on the road tomorrow, so my next update will probably be sometime in the evening.  That's assuming that something strange and bloggable happens to me between now and then.

But when has it not? 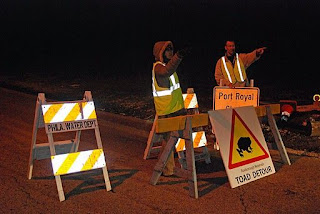 I had envisioned something a bit more like the way I envision toad-helpers in Britain: people in sensible shoes, with flashlights, poking about in the dark. I had no idea you had road-blocks and bull-horns and giant flashing lights. Are there helicopters? Can I get in on this? It sounds exciting.

Welllllll... we've got the giant flashing lights, all right, but they don't have batteries for them. So it all balances out.

What we DO have is little kids. Their parents bring them at the beginning of the evening and they start out being afraid to touch the toads. Then they get into it. Very moving, on many levels.

As it turns out they're *real good* spotters. Comes from having their eyes so close to the road, I guess.