Poets and Pandas in Chengdu 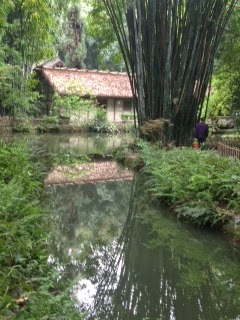 One week after the more-than-daylong return trip from China, the jet lag yet lingers. Which is why I didn't post this yesterday. But I have hopes of catching up across the board soon.  Meanwhile...

Chengdu is a wonderful place to visit, and if it weren't far to the west, just below the Himalayas, and in competition with all the rest of China, it would be flooded with foreign tourists. As it was, a group of six Americans was a major photo op for many of the locals. There was a lot to see and, even with a tour guide, we didn't around to half of it.  But we did get to visit one of my favorite places in all China: the Thatched Cottage of Du Fu.

Du Fu was one of the two greatest poets of Chinese literature. (The other was Li Bai -- his friend.) He led a difficult and peripatetic life. Roughly 1,250 years ago, he lived for four years in a thatched cottage beside Flower Bathing Brook on what was then the outskirts of Chengdu. During that time, he wrote many of his greatest poems, including one about the cottage itself. 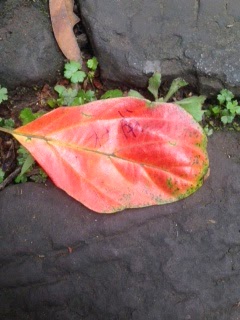 The cottage has been a tourist destination for over a thousand years. During that time, many great poets wrote major poems about the experience of visiting  the cottage.  Which was rebuilt, torn down, reconstructed, expanded to the size of a small palace (as befitted a poet of his stature) and then rebuilt into historians' best guess as to what it must have looked like and surrounded with the best gardens that Chinese landscaping could create.  Which is saying a lot.

If I lived in Chengdu, I would go there every day, find a quiet place to sit, and write.  Since I do not, I asked our guide to write Du Fu's name on a leaf I picked up from a walk. She did, I put it back, and then I took a photo of it.

And left it there.

Chengdu is famed for many things. (Weavers have been making brocade there for at least two thousand years and have, as a result, achieved preeminence.  Hence, one of its nicknames is Brocade City.)  Currently, it's probably best known for its panda preserve.

The preserve is chiefly a place for the study of preservation of pandas. But it also serves as a zoo.  It's a large and sprawling place with a denser population of pandas than you'll find anywhere else in the world. (Pandas are very territorial.)

The last time I was in Chengdu, I had the experience of holding a young panda on my lap. Alas, an outbreak of distemper closed down that option.  But they were still well worth seeing. As witness the brief film below:


One of the many other pandas, Gong Zai, was the model animators used for inspiration when creating the movie Kung Fu Panda.  This was a fact our guide was very careful to impart, and there was a certain amount of signage about this fact as well.  Which just goes to show that Story is King.  We were standing in the largest such facility in the world, an extraordinary place engaged on extraordinary work of great value... and its role in an animated film was being used to add luster to the experience.

If you want to be a big deal somewhere locally, write a story about it.  Or, as Du Fu learned, a poem.


Above: Photo credit me. You should see the waterfall.  And the koi. 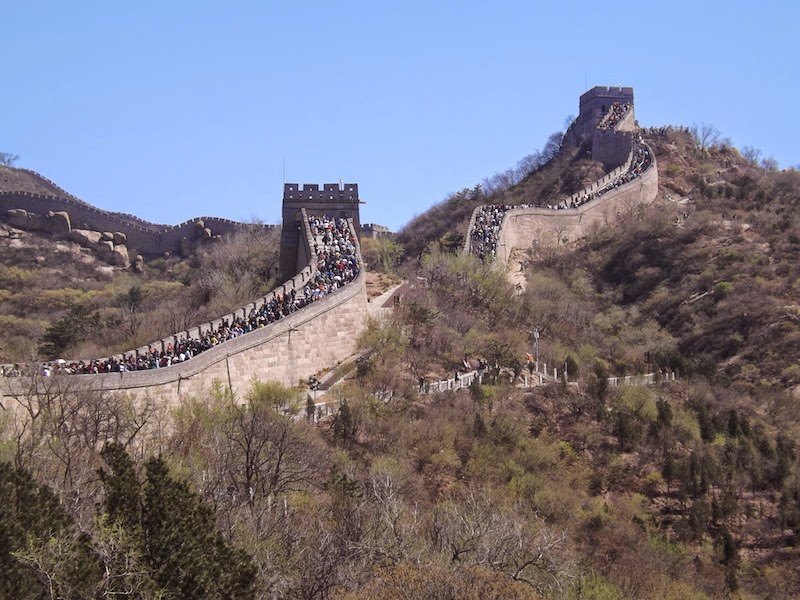 And did I walk upon the Great Wall?

Yes, children, I did.

I was on one of the restored/reconstructed sections, obviously. But it was still a moving experience and possibly the one single experience that the traveler to China must have or else regret missing forever. Samuel Johnson (did you know?) was among the many who yearned to see the Great Wall but could not. As James Boswell recorded:

“Johnson once talked with uncommon animation of traveling into distant countries; and that an acquisition of dignity of character was derived from it.  He expressed a particular enthusiasm with respect to visiting the wall of China. I catched it for the moment, and said I really believed I should go and see the wall of China had I not children, of whom it was my duty to take care. ‘Sir, (said Johnson,) by doing so, you would do what would be of importance in raising your children to eminence. There would be a lustre reflected upon them from your spirit and curiosity. They would be at all times regarded as the children of a man who had gone to view the wall of China. I am serious, Sir.'”


The wall was, as you can probably tell from the photograph, thronged with tourists, almost all of them Chinese. The young bounded onward, pausing every now and then to take a selfie. The old clutched the rail, climbed a step at a time, and took frequent rests. Somewhere in between, I ascended through four guard houses, rising to the highest point visible from where I started.  Occasionally, Chinese tourists would stop me with a request that I pose with them for a photo.  Not, obviously, because I was so famous there that they recognized me but because anyone of non-Asian descent is in most parts of that country a sight worth seeing.

Halfway up my trek, a crowd almost stopped all forward passage.  There were three young women, quite lovely and very dark-skinned, having their pictures taken. Tourists would thank them and leap back into the crowd, to be replaced by someone new wanting to record his or her glancing meeting with them.  I had to admire their courtesy to utter strangers.  They were remarkably good sports about a situation that must have happened to them quite a lot.

When I got to the furthest point in my excursion, I could see the wall stretching out ahead, down and then up again to the next mountain ridge and felt the urge to go on and on, deeper and deeper into China.  But that wasn't practical.  So instead -- and I realize this was whimsical of me, but we are all allowed our foibles now and then -- I clutched the cold stones of the wall, every one of them scratched with the names of visitors, overwhelmingly in Chinese.  I stared out into the mountains and at the Great Wall stretching ahead of me.  And I whispered to the unheeding air, "Sam, I am here."

The Great Firewall of China is no joke.  I could not update my blog during my journeys in China. So I'm going to be doing a series of posts retracing my steps across that great nation, starting this Wednesday with my return to Chengdu.

In between, if I can find the time, I'll be posting non-Chinese blogs.  Just because there's a lot of stuff going on. 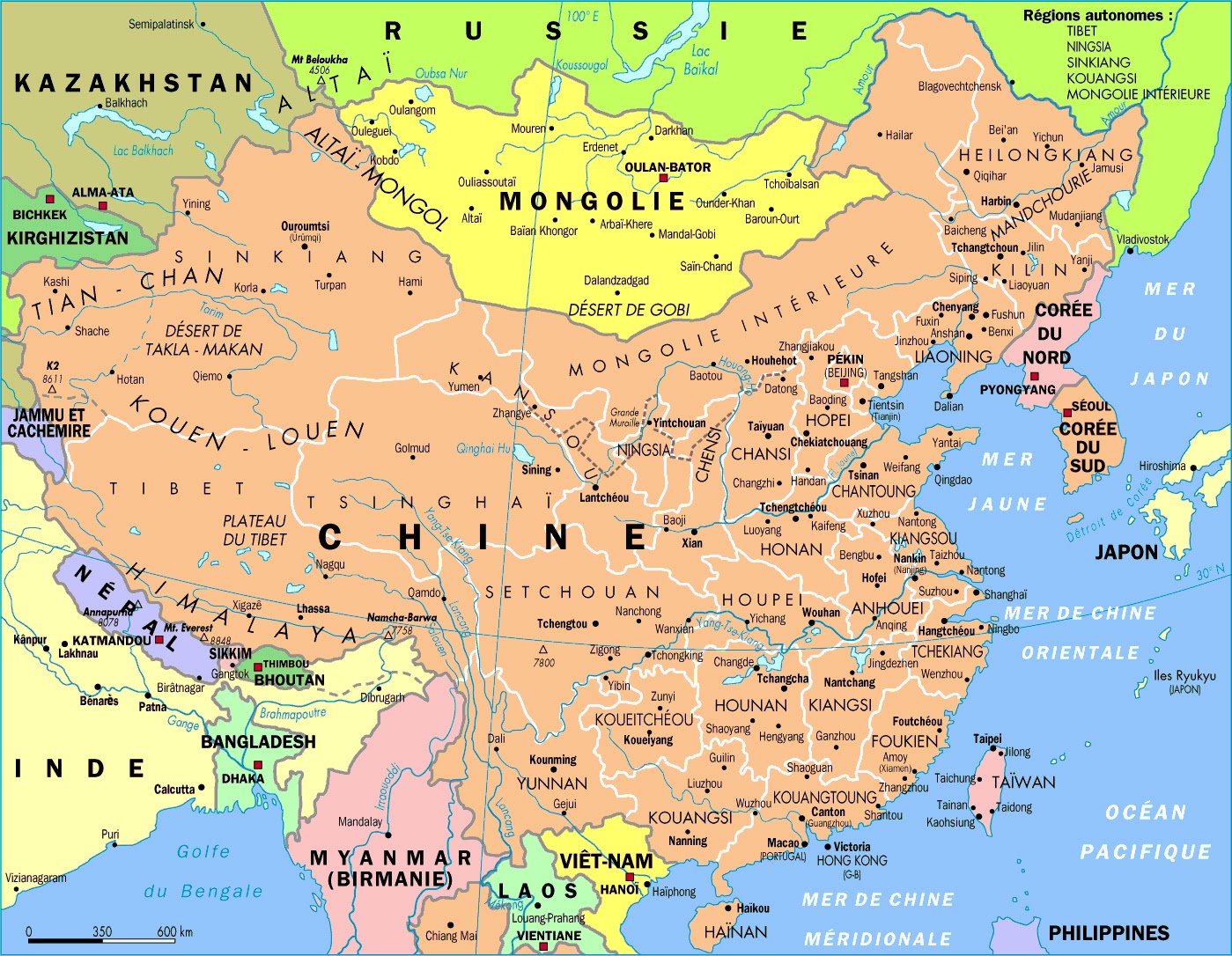 As always, I'm on the road again.  This road trip, however, will be even more extroardinary than usual.  Marianne and I will be spending almost three weeks in China with a group of friends that includes Ellen Datlow and Eileen Gunn.

Let me repeat that: China.

The next three weeks will either be a series of nightly or near-nightly exuberant posts on the wonders of that great land... or else a monotonous unchanging view of the map above, I don't know which.  The Great Firewall of China is no myth.  On my first visit I discovered that I could not even see this blog, much less update it.

But I think I have a work-around.  I've got a son in the States and IF his email account is accessible and IF he has the time and remembers the passcodes AND the Sun and Moon and Planets all align... Then you can share my adventure with me. 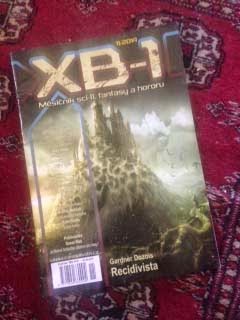 I'm in Czech print again!  My story "For I have Lain Me Down on the stone of Loneliness and I'll Not Be Back Again" appears in the November 2014 issue of XB-1, a zine that make me rue my monolinguality every time I see an issue.

I wonder how much trouble the opening epigram gave the translator. It's an old song or poem by our old friend Anonymous called "The Irish Dancer, " which goes:

Ich am of Irlaunde,
And of the holy londe
Of Irlande.
Gode sire, pray ich the,
For of saynte chairitéCome ant daunce with me
In Irlaunde.


A French editor once told me that I am second only to Howard Waldrop in being deeply hated by his translators.  Late one night, he told me, he got a call from one who was in tears because she was unable to discover what Mötley Crüe meant.


Above: The title of this post is, of course, the story's title in Czech.

One of the first things a novice playwright has to learn is that if a character is to age or reappear in different costume, the events on stage must go on long enough without him/her for the necessary costume or makeup change.  It's not as glamorous as the arranging of incident and emotion, but without it the play simply will not work.

A few months back, I wrote my first comic book script.  It's for a Locust Moon Comics/Dark Horse Comics anthology, a sequel to Once Upon A Time Machine. Which will feature Greek myths and legends retold with a science fiction twist.

What have I learned so far?  Some obvious things, of course.  The dialogue has to be concise, to avoid filling the panels up with words. A wordless panel or one with a single word or short sentence can have enormous power -- but when you've only got so much space to work with and a great deal of information to convey, you have to use that trick sparingly.

Less obviously, the process of writing a story is very different when it has to come out to a specific number of pages. With a prose story, I simply let the story find its own length.  For the script, however, the story I set out to tell was too long, so its plot and intent and outcome had to be changed completely in order for it to flow properly.  Most surprisingly for this tyro, the bottom of each page had to be stronger, more emphatic than the top or middle, so that the reader would carry a clear understanding of exactly what's happening to the next page.

I expect to learn a lot more when the book comes out and I get to see my words transformed into images.  But that won't be for a while yet.  The stories are still being drawn.


And a word about the coming month...

On Saturday, Marianne and I fly to to China with a group of friends including Ellen Datlow and Eileen Gunn.  We'll be gone for most of April.

If I can, I'll keep my blog updated.  It's quite possible I'll be blogging more than usual -- I'll certainly have a lot of wonderful things to blog about.  But it's also possible that I won't be able to.  The Great Firewall of China is not a myth.

Wish me well, and keep your fingers crossed!

*
Posted by Michael Swanwick at 7:51 AM No comments: