The Throne of Swords, Empty and Dark 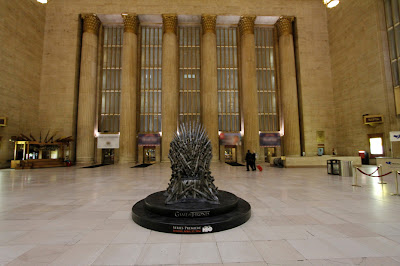 Why does no one tell me these things?  The publicity blitz for the George R. R. Martin (we old-timers sometimes call him "Grr" or "Railroad") HBO series The Game of Thrones brought a prop throne to 30th Street Station last week.  Somebody told Kyle Cassidy and he made a wild detour to sit on it on his way to catch a plane out of town.  (You can see a photo of him looking ruthless and cunning here.)  But by the time I heard about it, it was gone.  So I missed my chance.

Too bad, too.  I would have dug out the leather jacket and the shades, dressed up goth and broody, and gotten my picture taken sitting on the throne, reading Rebecca of Sunnybrook Farm.

I'm on the road again!  This time I'm going to a hotel in SeaTac, Washington for Norwescon.  Where I'll be handing out free limited edition signed-and-numbered chapbooks of American Cigarettes, a Darger & Surplus flash fiction.

So if you're there this weekend, be sure to get one.

And Marianne and I took Sean to see the Eiffelette Tower . . .
So I took the opportunity of shooting a short video of it in mid-performance.  I apologize its briefness  The actual show goes on for quite some time.
Marianne points out that if you stand directly under the tower and look straight up while the lights are flashing, you'll feel like Frankenstein's monster.  Surprisingly, almost nobody thought of doing that.  But one small boy staked out the exact center and lay on his back for almost the entire performance.
*
Posted by Michael Swanwick at 5:31 AM