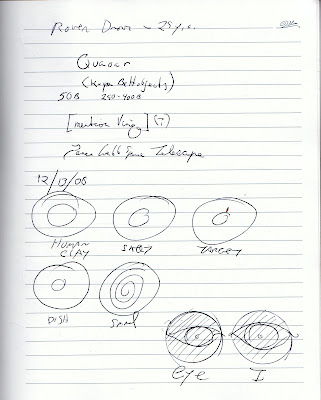 For some reason I was thinking about Kuiper Belt objects, such as Quaoar.  Also the James Webb Space Telescope.  The [mention Vinge]? suggests that I was toying with writing an essay.

I cannot make sense of the top line, though clearly it's related.

The circles below were doodles when I was thinking of writing a series of stories on plates and then firing them in one of those do-it-yourself-kiln places.  I was looking for subjects that would naturally lend themselves to circles.

Most commonly, I toy with the notion of writing planet stories on plates.  So far, I've been stopped by my lack of artistic talent and the fact that the plates would look a lot better if lightly background-painted as actual planets.