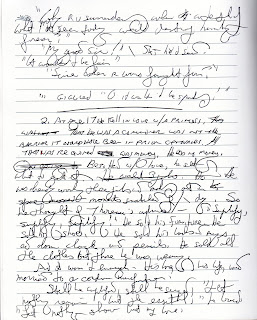 "Why are you surrendering when a tenth of what I've seen today would destroy humanity forever?"

"Since when are wars fought fair?"

The ending of the story was written telegraphically because as I tied it up, I realized it had been done before.  By Larry Niven perhaps?  Anyway, it had been done, and well, and so I couldn't revamp and improve the story toward eventual publication.

2.  At age 17, he fell in love with a princess.  That he was a commoner was not the barrier it would have been in prior centuries.  All that was required was money.  He had no money.  Besotted with love, he set out to get it.  He was already working three jobs and making art from moments snatched from the day.  So he thought of Thoreau's advice -- "Simplify, simplify, simplify!"  He sold his furniture.  He sold his shoes.  He sold his books and rugs and alarm clock and pencils.  He sold all the clothes but those he was wearing.

And it wasn't enough.  His love, his life, was married to a condom manufacturer.

Okay, this one is going pretty good.  We'll see if it wraps up well.