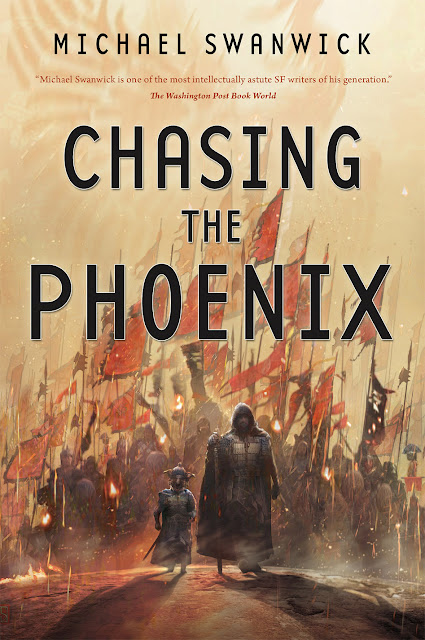 Chasing the Phoenix has been out for a couple of months and the reviewers have had ample opportunity to take their whacks at it.  And the results?

Almost embarrassingly positive.  In Analog, Gary Sakers writes: "Swanwick is a masterful guide to the bizarre and hilarious adventures of Darger and Surplus. He keeps all the elements moving, suspending disbelief like a talented juggler. Not simply funny, this book sparkles with genuine wit. SF has seen many con artists; Darger and Surplus are a supreme example."

Kirkus calls the novel a "supple, artfully humorous, and vastly engaging yarn," and concludes, that "along with a splendid supporting cast, Swanwick offers a pair of delightful rogues whose chief flaw (like Jack Vance’s celebrated Cugel the Clever, a likely inspiration) is that they’re a little too crafty for their own good. Swanwick’s approaching top form, and this one’s just too good to miss."

Meanwhile, over at Publishers Weekly says that, "Swanwick deftly incorporates the literature and history of imperial China into the established post-technology world. The style may distance readers who are more used to stories of emotional development, but as Darger’s schemes become more intricate, the intellectual puzzles keep interest right to the end."

In Shelf Awareness, Nancy Powell calls the novel a "sweeping fantasy epic," and states that "Swanwick deftly weaves myth and historical fact together to create an intriguing dystopic mystery whose resolution will elude readers until its final pages. His vision of China hinges on the fantastical, but it's a believable resemblance that gives the narrative a foreboding power.


Over in Booklist, David Pitt declares, "For readers who’ve never met Surplus and Darger, this book is like a breath of fresh air, witty and imaginative and just plain goofy fun. Fans of the duo (they’ve appeared in several short stories and one previous novel, Dancing with Bears, 2011) will be lining up for the book; libraries with large SF/fantasy collections may want to stock multiple copies."

Duncan Lawie's review in Strange Horizons begins "Darger and Surplus are back. If this means a lot to you, save some time and go fetch Chasing the Phoenix straightaway. If not, read on," and concludes by stating that "the ending is a delight. Swanwick builds a pleasurable reading experience at every level. From word choice and sentence shape to plot and character, each reflects and amplifies the other and the whole package is tied up with just enough loose ends to look forward to more in this series."

And finally, in the Chicago Tribune, Gary K. Wolfe writes, "Veteran fantasy readers will recognize Swanwick's duo as descendants of, and a tribute to, Fritz Leiber's beloved old sword and sorcery stories of an equally larcenous duo named Fafhrd and the Gray Mouser, but Swanwick's snappy dialogue and satirical barbs are entirely his own."

I will not pretend that I find these reviews anything less than gratifying. But writers write to be read. So I encourage you all to buy a copy or borrow one from the library or a friend.  That would please me even more.

And for those who haven't read the first Darger & Surplus novel...

I want to make it clear that each of Darger and Surplus's adventures is a stand-alone work. There's no need to read the earlier book before reading Chasing the Phoenix.  True fact.

Posted by Michael Swanwick at 10:12 AM 6 comments:

.
So did you see the lunar eclipse last night?

Marianne and I went down to the beach and sat on the sand, which turned out to be the the best way to do it.  The moonglimmer on the Atlantic was bright and broad at first. Then the eclipse began. At first it was simply a by-the-books darkening and dimunition of the lunar disk. But then, when the moon had slipped almost entirely into the Earth's umbra, the disk faded into visibility, reddish and evocative.  The ocean beneath it went dark.

As the moon drifted deeper into shadow it grew ruddier and more obviously spherical.  It looked a lot like the paintings of the Red Planet, back when the surface of Mars was known only in the vaguest and muzziest detail.

I could not help thinking of the ancient Greeks and the Babylonians before them and the now-forgotten peoples before them both, who studied the skies with only their unaided eyes and their native wits. They could see the moon recapitulating a full month's waxing and waning in the course of a few hours -- only in retrograde.  What could it mean?

Some of the moon's secrets could discovered by the ancients. But many more awaited the discovery of the telescope. There followed centuries of improvements in optics.  But the new discoveries were incremental until the second half of the past century when human beings went from squinting through telescopes to walking on the moon.

So many thousands-of-years-old questions were answered within my lifetime!  I could not help but wonder what questions, easily articulated today, must remain unanswered until, millennia hence, instruments unimaginable to us make their discovery possible.

Anyway, it was a good eclipse.  Despite the "supermoon" hype, it wasn't noticeably better than other lunar eclipses. I remember in particular standing in my back yard, some years back, staring at a reddening moon when Bobby next door came out to put a bag of garbage in the trash can. When he asked what I was looking at, I pointed to the eclipse.

"Get out of here!" he exclaimed.

Posted by Michael Swanwick at 4:46 AM No comments:

Science fiction and fantasy writers are a group are extraordinarily generous with advice to new writers. A moment's thought, however, reveals that this is just encouraging talented young people to occupy the publishing niches and win the awards that would otherwise go to to us Old Hands. Ask Unca Mike is an attempt to rectify this deplorable situation.


There's Plenty of Room at the Bottom

Why are there so many awful stories being published, and how do I get mine to be one of them?

If editors had their way, they would only publish wonderful stories. But they have schedules to keep and magazines to fill, and so they settle for what they can get. The moral here is obvious: aim low. Awful stories are both easier and faster to write than good ones. If you flood the magazine’s in-box, you have a greater chance of your story being the one grabbed when he editor says, “The heck with it. I’ll print this stinker here.”

Culture, Popular and Not

Why are writers so bad at popular culture?  In every story that includes it, it always feels ham-fisted and forced.  Is there a good way to include movies or music or video games without sounding like a sixty year old white dude?

Too Young and With-It To Read Your Stuff

If you think I’m old, you should see how old the average editor is! John W. Campbell was editing well into his seventeenth decade. Naturally, this makes editors culturally conservative. When I was starting out, it was almost impossible to sell a story about rock and roll – and that was in the 1980s, when people were first beginning to realize that rock was no longer a viable art form. What editors wanted then was stories about jazz. Today, it’s almost impossible to sell a story about rap or hip-hop culture. A newer, younger generation of editors wants stories about rock and roll.

So if you want to include current popular culture in your work, the best thing to do is to write it now and set it aside until you’re sixty years old.


If you have a question for Unca Mike you can post it below. Or write to AskUncaMike ("at" sign) gmail.com. I'll respond to those I have the best answers for.