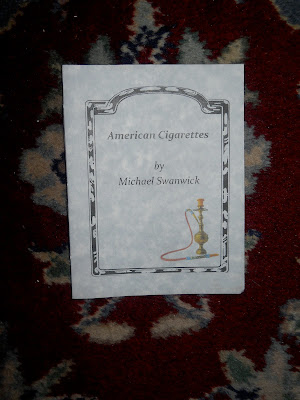 I'm putting that in caps because I'm not officially there.  I tried to get on the program, but no luck.

Neverthless, I will be there.  And I'll be giving out limited edition signed-and-numbered chapbooks to promote my forthcoming Darger & Surplus novel Dancing With Bears.  As I explained earlier:


I am married to self-styled nano publisher Marianne Porter, sole proprietor of Dragonstairs Press, one of the newer and unquestionably smaller publishing houses that are actually worth your attention.  Together we cooked up a series of four small chapbooks extracted from "Smoke and Mirrors:  Four Scenes from the Postutopian Future," (originally published in Live Without a Net,  Lou Anders, ed.) which was a single story made up of four stand-alone (but sequential) short-shorts featuring those dashing rogues, Darger & Surplus.

So these are promotional items worth having.  At Lunacon, I handed out copies of the first, Song of the Lorelei.  This weekend I'll be handing out the second, American Cigarettes.   If you're there, all you need do is come up to me and ask.  Of course, since I'm not on the program, you'll have to find me.  But think of it as a game of Where's Waldo? for folks who like literary collectables.  I'll be the guy with all the hair, and to make me easier for you to find, I'll wear a white jacket.

Plus, as a special one-time-good-deal-only, I'll be handing out fifteen copies of the first chapbook at a special event my friends are hoping to concoct during the con.  So keep your eyes open for that.  There aren't many of them left.

Oh, and if you happen to know any book dealers who are going to be at Norwescon . . .

Tell them that I'll be there and that I'll make the rounds of the huckster room and autograph anything of mine they've got.  I don't get to the West Coast very often, so they might as well take advantage of this trip.


Above:  Rather a murky snapshot of the American Cigarettes chapbook.  After this weekend, they'll be pretty much gone.

Curious...is there a way for those of us not in attendance to acquire the set?

Technically speaking, that jacket is putty, not white. But you will, my love, stand out.

Valya: As for the chapbooks, any not given away will be available for veryvery reasonable prices at the end of the summer. Drop a note to dragonstairs at gmail dot com and I'll be glad to put you on the list to be notified.

"After this weekend, they'll be pretty much gone."

Congrats on the new novel! Can't wait to read it.