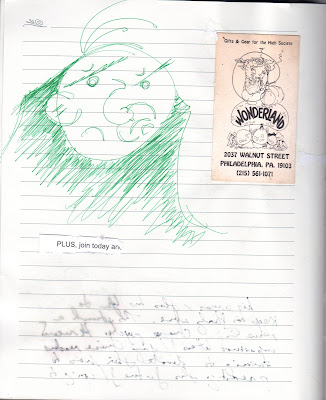 A doodle, a snatch of random mercantile prose, and what appears to be a rather old calling card for Wonderland, a "head shop" as they used to be called, which opened sometime in the early 1970s and, mirabile dictu, is still going today.  From the coloration, I'd guess that it had been underneath a bookshelf or such for a few decades when I found it and pasted it in.

I used to buy underground comix at Wonderland.  I remember how depressing it was when the genre died out and one by one the congeries of small odd shops I could find 'em in, stopped carrying them.

I never bought any drug paraphernalia there, though.  That's a good way to get yourself on somebody's watch list.