Of a Swallowtail Farm and the Final Image Book Picture 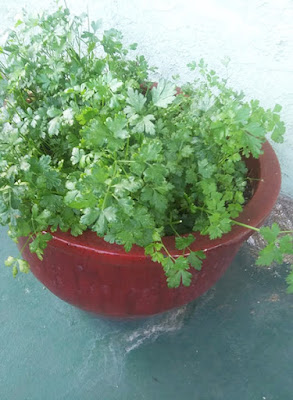 Pictured above is Marianne's swallowtail farm on the front porch. She didn't set out to raise butterflies. But it turns out that swallowtails love parsley. So they come unnoticed to lay their extremely small eggs, which hatch into extremely small caterpillars, which then proceed to eat and eat and EAT. Growing all the time.

Remember reading The Very Hungry Caterpillar when you were small? Something like that.

The caterpillars put away an astonishing amount of parsley and grow to a respectable size. Then they disappear. Sometimes during the night, they crawl away from the pot and go... somewhere. We've never been able to determine where.

The world is full of mysteries. One of them is on our front porch.

Marianne also has a second patch of parsley, which is used in her cooking. There's something unspeakably cool about going out in the middle of winter to brush the snow off the parsley and bring in a few sprigs for garnish.

When she finds a swallowtail caterpillar on her cooking patch, Marianne plucks it off and removes it to the pot on the porch. 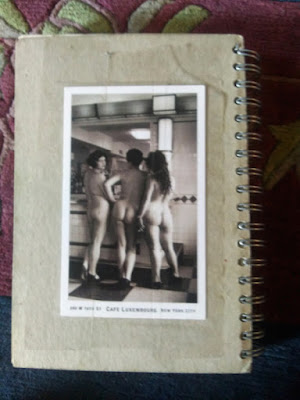 This is the very last image in the book. Put there because it's obviously a photo of the Triune Goddess. Most of the images of women taken from fashion and art magazines are far more glam than I would have liked. This one has the right edge of scariness. These are three dangerous women.

I first saw this image in an ad for the Cafe Luxembourg (West 70th St., NYC) in, I think, the New Yorker. It definitely raises in the mind an expectation of a rather louche drinking hole, probably somewhere high up in a skyscraper. Imagine my surprise when I ate there and discovered a cheerful, street level eatery with fish and chips and grilled rack of lamb on the menu.

Posted by Michael Swanwick at 7:35 AM

Also good. In either case, they are, as C. S. Lewis wrote of Aslan, NOT SAFE.