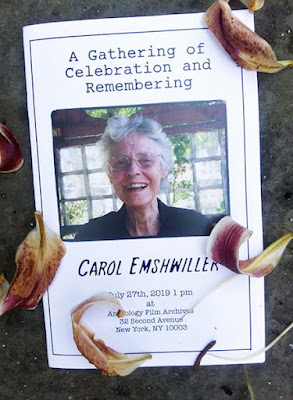 Saturday I went to New York City for a memorial in the honor of Carol Emshwiller. I will not enumerate who was there and what transpired, other than to note that her children and other family members did her proud.

I was one of those who stood up to talk about Carol. Here, roughly, is what I said:


I won't try to compete with Gordon [Van Gelder, who spoke immediately before me] in analyzing Carol's fiction. She was a very fine writer, with a vision all her own, and I am particularly fond of Carmen Dog, but I want to talk about her as a friend.

I don't remember when I first met Carol. But I vividly remember being at some-damned-event-or-other when she saw me and exclaimed, "Michael! It's so good to see you!" We then proceeded to have a really splendid conversation about pretty much everything on earth.

Later, I told all this to Marianne and a little bemusedly said, "So I guess Carol and I are good friends."

We were, too. Carol wouldn't kid about something like that.

Every time I saw her, she always greeted me by saying, "Michael! It's so good to see you!" And after we had parted, I always found myself thinking: Maybe I should try being a better person. It seems to work for Carol.

The last time we met was at the New York Review of Science Fiction Reading Series, when her eyesight was so diminished that when I said hello, she had to ask me who I was. But one thing was certain: Whoever I was, she was glad I was there.

Carol was that rarest of creatures, a writer who could talk matter-of-factly about her own fiction. One time, I saw her first and said, "Carol! It's so good to see you! What are you up to?"

"I'm in mourning," she said. "I just finished writing a novel"--this would have been Ledoyt--"and all these people I've been living with for years are gone. It's like they all died! I'm bereft." Then she asked, "Doesn't it feel that way to you, too?"

I considered the question seriously. "No," I said. "When I finish a novel, I feel like I've stopped persecuting my people. I imagine them running down the street, waving their hands in the air, saying things like, 'I'm free!' and 'I'm going to eat a hamburger--and nothing will happen to me!' and 'I'm going to move to Albany and get a job in a hardware store!'"

But maybe that's just because she was a better person than me.

Carol freely shared her friendship and with her joy. But in life nothing is really free. This is something you learn, if you live long enough. The price for someone's presence in your life is the pain you feel at her absence. When she's gone, the only question that matters is: Is the joy her life brought you worth the sorrow you feel at it ending?

It was worth every tear.


Posted by Michael Swanwick at 7:34 AM

It's sad when people who you cherish depart. Your heart-felt words got me a little misty.