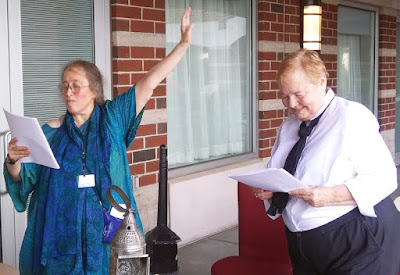 How did I spend your weekend? Funny you should ask. I was at a science fiction convention (oh, all right, it was Readercon), where I did a small amount of stagehand work in support of the first public reading of Greer Gilman's new one-act play Little Kingdom.

The reading was not part of the convention, which has such demands on its program time that it could only afford to offer Greer a half-hour. Alas, for a play 33 minutes long this was far from enough. So the participants invented a sort of Readercon Fringe by putting it on anyway, on the Terrace, as an independent production.

Greer Gilman played the part of Ben Jonson, "playwright, pundit, malcontent," while Marianne Porter was Ethel Smyth, "composer, suffragist, Sapphist."  The play records their first meeting on the Moon, the immediate dislike they take to one another, and how they come to terms with their fate and with each other.

It really was tremendously entertaining. Greer and Marianne played their parts with verve and brio, and everybody had a tremendous time. The audience, myself definitely included, loved it.

I also got to hang out with interesting people, meet old friends and new, buy books, learn much information of use and interest, and involve myself in yet more projects. Details as various matters become public. 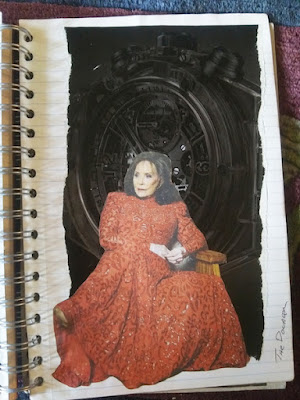 This is a great one . . . a picture of the Dowager herself.It brings out, I think, some of her glamour (in the novel, she is described thus: She was regally tall and imperially slim. She was also old, there was no denying that, but her face in age had taken on the mystique of a civilization lost in time and known only by rumor) and her darkness, but also the pain that made her into such a terrible individual. So I'm happy with it.


Above: For those who came in late, as a way of drawing attention to my newly-published novel, The Iron Dragon's Mother, I'm serializing the Image Book I put together as a way of helping me to visualize Faerie and its inhabitants. There are less than a dozen more images yet to come.