Tom Purdom on the Nook 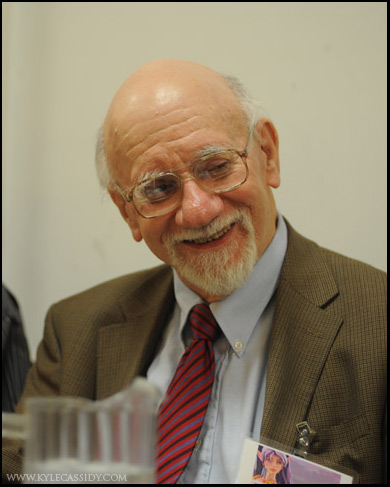 You can't live in Philadelphia and be involved in science fiction and not be a big fan of Tom Purdom.  Seriously.  We got a local ordinance passed.  It's the law.

Tom sold his first two science fiction stories in 1957 and more than fifty years later, he's at his peak form.  I liked "A Response from EST17" in the April/May 2011 double issue of Asimov's tremendously and, as always, I'm looking forward to whatever he writes next.  Plus, Tom is one of the most genial men you'll ever meet and a raconteur to boot.  What's not to admire?

Of course, all writers have their little quirks, and Tom's is that he's a fervent proselytizer for the Nook.  He bought one, fell in love with it, and wants everyone to do likewise.  So when the time came for me to buy an electronic reader (as Neil Gaiman told me once, they're "inferior to any book but superior to any library" because they allow you to throw a few hundred books in your carry-on when you travel), I bought a Nook.  Alas, under questioning it turned out that I wasn't planning to buy all my books in e-format from now on -- only disposable books and those needed strictly for research.

I have been a terrible disappointment to Tom.

Recently, Tom has begun experimenting with e-publishing for the Nook and the Kindle.  If you go here, you can find his Nook publications of several novelettes, a collection of three stories, and the first two installations of his literary autobiography When I Was Writing.

WIWW starts with Tom's first published story and goes forward from there, telling where the ideas came from, what he set out to accomplish, and anything that was happening in his life at the time that was relevant to the fiction.  If you like this kind of thing -- I emphatically do -- then Purdom's memoirs are a must-read.

There have been ten installments so far and you can read them for free on Tom's website here.

Last Friday I bought the two installments available from B&N and took the Nook with me to the Philadelphia Fantastic reading I did with Tom and Darrell Schweitzer.  Then I whipped out my Sharpee and got him to autograph the back of the case.


Oh, and the guy who gently corrected my German the other day . . .

. . . was Ulrich Elkmann.  The reason he contacted me privately was not from a desire for privacy but because Blogger won't allow you to comment unless you've joined up with Google or Facebook.  Now, since he's okay with this, I can openly say:  Thank you, Ulrich.

Well, not quite - since rats (and mice) in German are generically female, regardless of individual gender, it should be "Ich bin eine Flussratte" - which sounds a bit unidiomatic to German ears. The more common "Wasserratte", however,
would carry no negative undertones, being affectionally applied to anyone to, like Mole and Rat, loves messing about with boats. "Flussrat" (n., masc.) might, however, be a shortened form of the antiquated "Flussbaurat" - "Rat" not as in "counsel" but as in "counseller", like the -rat in "Hofrat" "Kommerzialrat", "Finanzrat" - a higly placed and officiously officious official, in the case of a Flussbaurat a Master of River Regulation, Harbour Works, Maestro di canali - a sorn who sees to it that the hrossa do not get into tomfooleries. 'Regardless of gender':"Ballettratten", however, are exclusively (I almost typed 'exquisitely') female - this is derived from the French "petites rat de l'Opéra", and it shows.