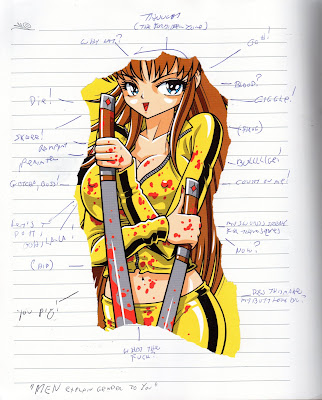 I like anime and manga, but sometimes they're like the sweet old aunt who was always nice as nice to you when you were a kid but whom you know to keep away from the subject of Jews.  They can make you cringe.

Here's a picture of a blood-spattered cutie with breasts larger than her head, a sword in each hand, and . . .  well, just look at her.  You wouldn't want to have to explain the artistic merit of the genre using this as an example.

The picture was so extreme of its kind that I pasted it in and did a kind of postmodern ironic halo of remarks around it.  None of it sincere, of course.  But that's what makes irono-pomo so obnoxiously slippery.

Finally, I wrote a title down at the bottom:


"MEN Explain Gender To You"
I put "men" in all caps in an attempt to make it clear that the whole is meant as a criticism of manga's excesses, rather than a  reveling in it.  Did it work?  Probably not.  Even I'm not entirely buying it.

It's all a question of perspective, those boobs being bigger than the head thing. And I actually think it's a nice piece of art, despite it's obsession with boobs.

gack. edit out that apostrophe in the second "its."

Of course, those boobs are going to get in the way of using those swords...

I think what bothers me most about manga representations of women is how small their mouths are. I find that even more alarming than the whole perky-and-covered-with-human-blood thing.

The eyeballs are what gets me. Even in a manga where everything is drawn very realistically and well, often people will have eyeballs that are at least 50% too large.

And disturbingly, real-life youngsters are starting to wear contacts that give them giant anime-irises! Dag-nabbit!

Not all manga / anime artists use the big-eye style, but when they do it has some significance.

Only children and very young women -- i.e. only the innocent; we shall leave the issue of sexism aside, here -- have the large eyes. It's not unlike putting a halo on someone to show (s)he is a saint or otherwise holy: an icon, really.

As a consequence, if in such a work you see a child with naturally proportioned eyes, or if the eyes become so proportioned in a hitherto large-eyed face, it's a very clear "Oh-oh, watch out!" sign. By analogy, remember those American cartoons where an angel character signals (s)he is about to do something naughty by either ditching the halo or setting it at an angle over the head? Same deal.