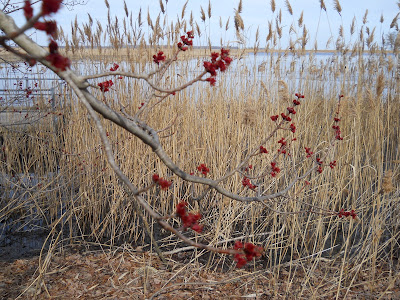 Marianne and I played hooky yesterday and went down to Bombay Hook, Delaware, looking for birds.

Those I saw:  Canada geese in great abundance, mallards, two tundra swans, wood ducks, a vast flock of snow geese (they can be recognized in flight because, since they have black wingtips, the whole flock seems to flicker), northern shovelers, coots, green-winged teals and ring-necked ducks, buffleheads, mergansers, ruddy ducks, a field of robins (they retreat to the woods in the winter and are just coming out now; soon they'll be in our yards), pied-billed grebes, turkey vultures galore, northern harriers, red-tailed hawks, three bald eagles -- one mature which we saw twice; two different immature, one of which had effectively gutted and was eating a rabbit while a turkey vulture and a murder of crows tried hard not to look like they were anxious to move in on it -- laughing gulls, a mourning dove, a red-bellied woodpecker, an eastern phoebe, American crows, European starlings, tree sparrows, chipping sparrows, song sparrows, white-crowned sparros, juncos, a red-winged blackbird, great blue herons, house sparrows and several bluebirds.

Plus a few birds we couldn't get a good enough view of to identify.  And pigeons, which we scorned to count.

But the chief thing we discovered was that Spring Is Coming.  Look at the flowering buds on that branch above.  Swear to God, the trees were budding as we looked at them.  We saw our first daffodils, in the middle of the brown wood where a house had once been.  That sense of change . . . of hope . . . of new possibilities is upon us.  The puddles by the side of the road were cloudy with frog eggs.  Their song was everywhere.  As witness the brief, shamefully amateur video here.


By the way, that black spot up in the trees?  An immature bald eagle.

When I was a kid in the 1950s, you rarely saw hawks or vultures or eagles.  Thank God for Rachel Carson.

I'll have more substantive things to say.  For the moment, it's all eagles and frogs.  Did I mention that I played hooky yesterday?