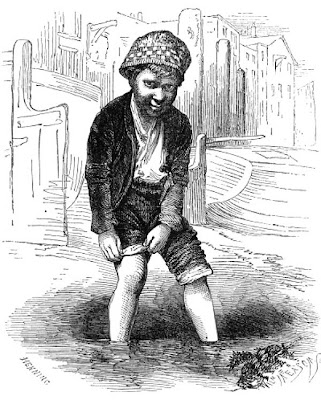 There's a lot to love about London.  I could spend a month just going to its museums.  But it's all those strange social institutions that give that city its peculiar flavor.  Some of them go back for centuries.  The Worshipful Company of Bakers, for example, who in 1986 held a ceremony in Pudding Lane to offer a formal apology for accidentally causing the Great Fire of London in 1666.  Others are more recent.  The Society of Thames Mudlarks has only been in existence for twenty years.

And exactly what is a mudlark?  I'm glad you asked.  In Victorian times, they were generally children, ages eight and up, who, when the tide went out, waded into the mud of the Thames, looking for chunks of coal, bits of metal, or tools dropped off of boats and lost.  If they saw a chance to steal coal, scrap, or anything else of value directly from the boats, they took it.  You can read Henry Mayhew's account of their lives here.

Today's mudlarks are a different breed altogether. The society is a group of hobbyists who have been licensed by the city to grub about in the muck on the north side of the Thames, below Parliament, looking for artifacts of the city's history. Pilgrims' badges, medieval floor tiles, Tudor daggers, the leather shoes of Roman children are collected, their locations are recorded -- and if an item is over three hundred years old is automatically run past an archaeologist.  The very best finds go into museums.

It sounds like good fun.  Filthy, dangerous fun, mind you.  But fun nonetheless.  You can read about these guys here.


And that reminds me of a story I heard back when I used to hang out with American archaeologists . . .

In colonial times, cheap clay pipes were everywhere.  When you bought tobacco in a tavern, there was row of tavern pipes for your use.  You simply snapped off the end of the very long stem (for hygienic purposes, the same way you used to wipe the top of a shared soda bottle with your hand before drinking from it) and threw the shard away.

Because the smaller the passage for the smoke was, the cooler the smoke, and because the technology for making those passages smaller steadily improved, these pipe shards serve an important function in Colonial American archaeology.  You find a shard, measure its thickness and the thickness of its bore, plug the two numbers into a rather clever formula, and voila!  You've got a reliable date for it.

Pipe stems also have the advantage of not degrading very fast.  They've got the lifespan of a pebble.

A Virginia archaeologist went on vacation to England, back in the early 1970s, and while getting a tour of a major British castle, noted that the grounds surrounding it were speckled white with clay pipe shard.  "My god!" he exclaimed.  "Somebody should do something about them!"

"We'd like to, sir," said the guide apologetically.  "But we simply don't have the budget to properly clean up after the tourists."

I choose to believe the English are still using the old pipe stem shared pipe method, rather than think that the docents at that castle know so little. ... I am also very good at self-delusion, but that's beside the point.

Good to know all those years living in the 18th century had some value ... ;)

Interesting that mudlarking is still being done, although I don't know why I should be surprised. For this information, and for the link to the Spitalfields Life site, much thanks.
--Mario

... or perhaps the point is that tourists have been coming for so long that ...

It suddenly dawns on me, since I've been (re)watching Lord of the Rings over these past few nights -- there are hobbits among the tourists. They, too, had long-stemmed pipes, albeit curved. Perhaps they left the good ones at home and took only the cheap white straight-stemmed clay ones with them when they travelled.

Between thee and me, Matthew, we may have hit upon the truth. :)

Yep, the pipe stems were dropped there by tourists. A humbling realization for an American to have. It's like Eddie Izzard says, "I grew up in Europe . . . where the history comes from."

Of course, in Egypt, their antiquities are marred by graffiti left by the Ancient Greeks . . .

So it really was tourists from two centuries ago, Michael? Your story leaves several interpretations open, stupid docents who didn't understand what they had being one of them. Somehow, I had associated the clay pipes more with the Netherlands and colonial Virginia, hadn't really had any reason to focus on pipes in England during this time.

That's the problem with writing first draft -- the text is never airtight. And of course I have only the time to blog first draft.

My fiction, however, I don't let anybody read before I've worked it to a fine gloss.

When a soufflé falls, Michael, you tell people it's supposed to be like that, it's a crustless quiche.

And, of course, you also meant your story to have more than one interpretation. You are simply too modest to say so.

I feel humbled by the thought I might not have discovered them all. [grin]

My modesty is so great it would fill a room. As Gary Trudeau would put it.