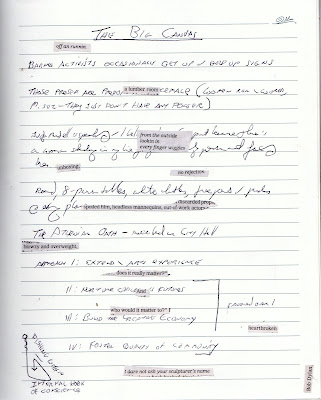 The Big Canvas
These are notes I took at a regional gathering of arts administrators, who gathered to see what ideas people had to promote the arts in a time of economic difficulty.  The short answer was:  pretty much none.

So I will only transcribe a few of the notes.  After the fact, I cut random phrases from a newspaper and pasted them over the page to make it into a kind of found-concrete poetry.

Barnes activists occasionally get up and hold up signs.

It's a long and sad story how the Barnes Foundation, a truly wonderful institution, bankrupted itself in a series of pointless and avoidable lawsuits.  In the aftermath, they were bailed out by public money and a new museum is being built for the fine art collection on the Parkway, in Philadelphia.  A number of people near the old Barnes felt strongly that it should have stayed where it was.  They've continued fighting, long after the war was lost, bitter and self-righteous people with some of the most cluttered protest signs you've ever seen in our life.


In the bottom left corner is a doodle titled Fishing Within and annotated, Internal Hook of Conscience.  I don't know why I like to make jokes about the agenbite of inwit, but I do.