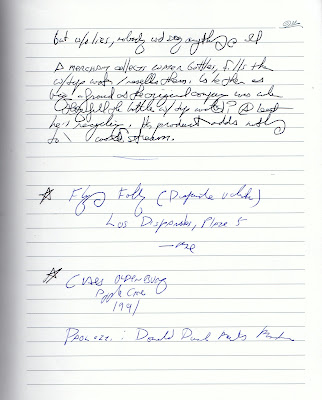 But without lies, nobody would say anything at all.
Sometimes you have to write out a notion in order to discover you have nothing to say:

A merchant collects water bottles, fills them with tap water, and sells them.  Is he then as big a fraud as the original company was when they filled the bottle with tap water?  At least he's recycling.  His product adds nothing to the waste stream.

And three entries from a visit to a modern art museum:

I like how my public library manages digital books... basically you can 'check out' an audio book or an ebook from their collection with your library account, but if a number of books have been checked out then it becomes unavailable until other people's downloads have expired. A book is 'returned' when the license for it expired (I think it takes about 20 days or less), even though they don't have any way to ensure a user deletes the book.

I think it's a good compromise between fair use and giving stuff away for free on the Internet. Sure, abusive people can still probably crack whatever protection they have included in the ebook file (if any) and share it illegally, but people have been doing that anyway by scanning stuff and releasing it on download sites or whatever. At least this controls how often people can download it, and does not allow them to legally make it available.

It sounds like it may be a good system. We'll see how things shake down over the next decade or so.

Whenever I start to worry about the Internet shutting down bookstores, lowering advances from publishing houses, and marginalizing writers' incomes, I remind myself that times are ALWAYS hard for writers. Commercial lending libraries closed, newspapers stopped serializing novels, the pulps died, the slicks stopped buying fiction . . . Every change seriously challenged the ability of writers to survive. And yet we are still here.