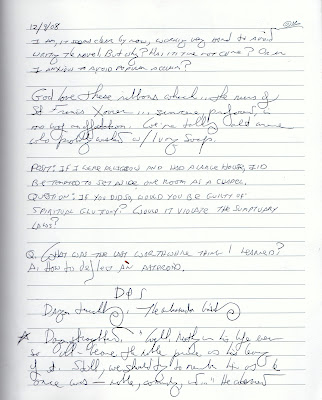 This was an uncharacteristically introspective entry.  It begins with a pep-talk to myself:

I am, it seems clear by now, working very hard to avoid writing the novel.  But why?  Has its time not come?  Or am I anxious to avoid popular acclaim?

Then notes toward a thought which came so swiftly I had to leap over sections to get it down in the instant of inspiration.  I don't think I ever did anything with it, and so we'll never know exactly what that thought was:

God bless these ribbons which . . . the nuns of St. Francis Xavier . . . sincere, profound, in no way an affectation.  We're talking about women who probably washed with Ivory Soap.

Next, what seems to me a pretty good question.  I changed the pronouns to second person midway through, so it would be clear that it was the question that interested me, rather than my own relationship to it


Posit:  If I were religious and had a large house, I'd be tempted to set aside one room as a chapel.  Question:  If you did so, would you be guilty of religious gluttony?  Would it violate the sumptuary laws?

Penultimately -- noble word, 'penultimately!' -- a pop quiz I abruptly pulled on myself.  Luckily, I had a good answer:

Q.  What was the last worthwhile thing I learned?
A.  How to deflect an asteroid.

And finally notes toward Dancing With Bears:

Darger straightened.  "Well.  Nothing in his life so ill-became the noble prince as his leaving of it.  Still, we should try to remember him as he once was -- noble, commanding, and --"  He cleared