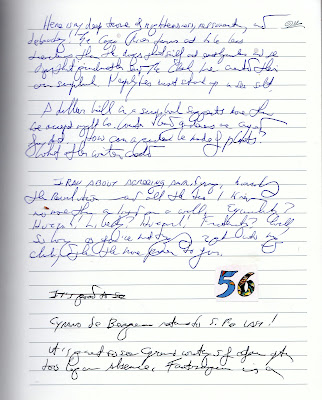 Here is my deep trove of righteousness, resurrection, and debauchery! The Congo River turns out to be less treacherous than the dogs that sniff and [something] and the dogs that grind them so the Clash have created their own scrapbook.  Neophytes must stand up in sea salt.
A dollar bill in a scrapbook suggests more than we accept might be.  [Something] bad gardeners are [something] for dirt.  How can a garden be made of plants?  What other writer would
I ran about agreeing, amplifying, hurrahing the Revolution -- and all the time I knew no more than a lizard on a wall.  Equality?  Huzzah!  Liberty!  Huzzah!  Fraternity?  Well, as long as you're not trying to get into my club, then the more power to you.

Reading the above, I thought at first I was listening to something on the radio and transcribing it as fast as I could, skipping ahead whenever I lagged behind, to see what the result would be like.  Parts of it sound like me, though.  So I think I was extemporaneously composing a rant while simultaneously trying to write it down, falling behind, and then skipping ahead whenever I lagged.
It's a kind of thought exercise.
Down at the bottom:  Cyrano de Bergerac returns to S.F. at last! and It's great to see Cyrano writing S.F. again at last, after too long an absence.  [Something] is a
I'm still trying to write that blurb.  Those things are more work than most people realize.
*
Posted by Michael Swanwick at 12:59 AM