The Man Who Walked Around the World 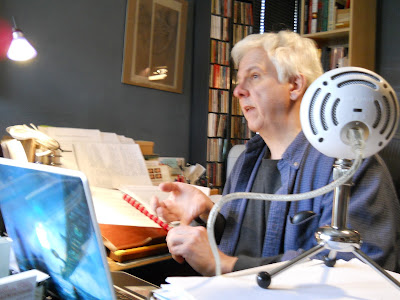 It was a quiet, mildly social weekend.  On Sunday, Marianne and I went to a double reading hosted by Philadelphia socialites Trillian Stars and Kyle Cassidy.

Carolyn Turgeon read from her new novel Mermaid (characterized in an enthusiastic review in Publisher's Weekly as a "surprisingly dark retelling of Hans Christian Andersen's The Little Mermaid" -- whoever wrote those words cannot have read the original), and Jeanine Cummins read from The Outside Boy, a novel about a young Irish Traveler in the 1950s which Booklist declared "a deeply moving and elegiac look at a vanishing culture."

The day before that, I went over to Gregory Frost's house to participate in a how-to-write Webinar run by StarShipSofa.  (Which is, you'll recall, podcasting the Darger & Surplus Explain . . .  How to Run a Con series every Wednesday.  You can find StarShipSofa here.)  That's Greg, above, doing an exemplary job of explaining how to begin a story.

Tony C. Smith, who hosted the Webinar, made several jokes beforehand about having glasses of whisky at hand.  So afterward, when Greg gave me a ride home, I poured him a glass of the good stuff.

Oh, please.  The good stuff.  Johnny Walker Blue Label, I mean.  It tells you just how highly I esteem Gregory Frost that he got a drink from that hoarded and very slowly dwindling bottle.

During our conversation, Greg told me about the existence of a six-minute-long commercial.  And not an ordinary one either.  A commercial that aspires to the status of art.  One with an astonishing performance by Robert Carlyle.