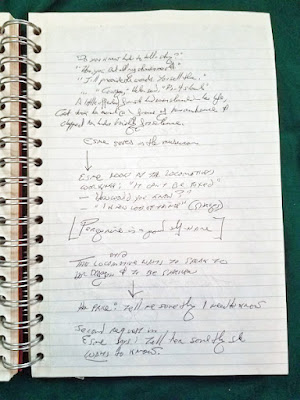 Here's a rarity: a page from the Image Book with no images.

Just in case you can't read my handwriting--and there are at least three people in this world who cannot--the text is as follows:

A little offended, for she had never slouched in her life, Cat took her mark at the focus of her audience and clapped her hands briskly for silence.

Esme serves as the musician

[Peregrine is a great elf-name]

Her price: Tell me something I need to know

Second request...
Esme says: Tell her something she wants to know.

The first section is early notes for the scene in the hobo jungle where Caitlin (now Cat) tells the first trickster tale of Mother Eve. As eventually written, it was performed without music.

The second half is interesting because I'd forgotten that originally I planned to have the locomotive die. The encounter plays out quite differently in the final book. NO LOCOMOTIVES WERE KILLED IN THE MAKING OF THIS NOVEL.

Esme is being her usual enigmatic self.

Above: For those who came in late, my latest novel, The Iron Dragon's Mother, will be published in only 2 days. To draw attention to this fact, I'm serializing the Image Book I made to help me imagine a strange world for the book.
*


Posted by Michael Swanwick at 6:12 AM