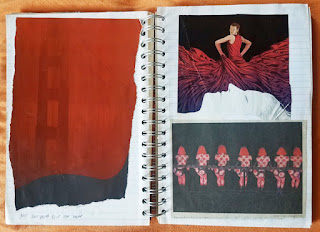 I am still promoting the heck out of my just-published novel. Don't worry, though. This blog will back to the normal variety and silliness soon.

Today's promo tidbit is a list of named characters who appear in The Iron Dragon's Daughter.

Olympia, daughter of Hephaesta, of the line of Hekate
Orlando

I've tried to play fair with this, but inevitably some characters will appear under more than one name, one or two are only referred to (only the most important, though, I've weeded the list of a lot of off-stage names), and I may have shorted one or two characters who are referred to only by their titles. This should give you an idea of the cast of characters, though.

This was culled from a much longer list of proper names and odd words which I assembled for the proofreader. I'm considering combining that list with the lists for the other two Dragon novels and posting the results here.

The caption on the left-hand page reads Not this novel but the next. Which means I hadn't discovered the bridges yet. There are bridges in the novel and they matter.

The lower right hand image on the photo above comes from the New York Times, of all places, and shows dancers at the Folies Bergère, of all places. Or it might be the Moulin Rouge. It hardly matters which. All that matters is the Dance of Life and the Goddess, unnoticed, behind and beneath it all.