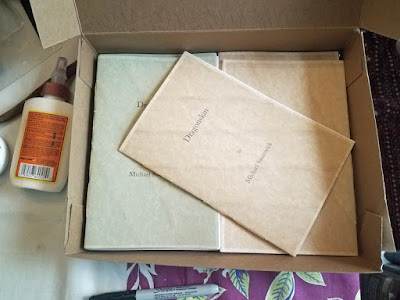 Marianne took a notion into her head not long ago and commissioned me to write four flash essays on creators of fiction about dragons. So I wrote about Lucius Shepard, Ursula K. Le Guin, Anne McCaffrey,  and (ahem) me. Then I added a fifth short essay tying them all together and handed them off to her.

Marianne created one of her usual hand-sewn, craftily-made chapbooks in an edition of 50 signed and numbered copies, plus another ten half-bound in boa constrictor skin. They went on sale yesterday.

Of the remaining 50, only 16 are still available for purchase.That's them up above, in their natural habitat--the Dragonstairs kitchen table.

So this will be the softest of soft sells: If you're a collector of Dragonstairs Press publications, or if for some other reason, you desperately want a copy, you should go immediately to the website at www.dragonstairs.com. 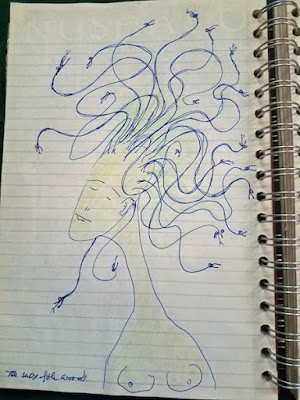 I'm rather pleased with this one. Usually, I can't draw that well.


Above: For those who came in late, my latest novel, The Iron Dragon's Mother, will be published in 19 days. To draw attention to this fact, I'm serializing the Image Book I made to help me imagine a strange world for the book.