Today is Father's Day which, for me, is Son's Day. Many years ago, the midwife handed a small and perfect baby to Marianne. Then, after Marianne had cuddled and marveled for a time, Heather (that was the midwife's name), picked him up again and, turning to me, said, "Do you want to hold him?"
I was young and stunned--how often do you get to be present for a miracle?--and didn't want to be in the way, so I said, "Oh, no, that's okay."
"Take your son, Michael!" Heather said, and thrust the infant into my arms.
I looked down at Sean and he looked up at me. He was born curious and looked oupon all he saw with calm interest. And, looking into his eyes, I thought, "Someday, my son, you will grow up and turn me into an old man and then I'll die. But that's all right. It's a small price to pay for having you in the world."
This was not a writerly notion. It was what I actually thought and what I honestly felt. It's what I still think and feel.
So, Happy Son's Day, Sean! I loved you the instant I set eyes on you, and I've loved you ever since. 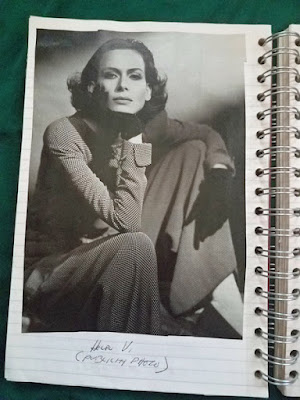 The caption reads: Helen V. (Publicity Photo)
Okay, that's actually Lauren Bacall, and it's doubtful that Helen V. ever looked that good. But it captures some of the intensity and seriousness and (but I may be reading this into the photo) hidden sense of humor that Helen V. has.
Presumably, she told the photographer to make her look good. I hope he got a bonus for that particular session.

Top above: Las year's Google Doodle for Father's Day. Credit where it's due, Google makes the world a better place by commissioning such things.
Middle above: For those who came in late, my latest novel, The Iron Dragon's Mother, will be published in 9 days. To draw attention to this fact, I'm serializing the Image Book I made to help me imagine a strange world for the book.