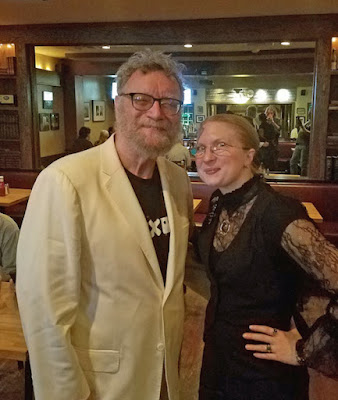 Last night was my reading--and Lianna Renee Hieber's--at the Galactic Philadelphia event held in the main branch of the Philadelphia Free Library. There was a large audience filled with other writers, important fans, and people who just plain love literature. And, modesty be damned, Lianna and I knocked them out.

I did a fair amount of coffee house singing, back in my teens, back in the Sixties. One man, one guitar, and songs skillfully written to disguise the fact that my singing is terrible. But I took away from that the discovery that all performers learn that when you have a good audience, energy flows from them to you. And I had a great audience. I could see that they were enjoying the reading. Some of them were really enjoying it. So I just want to say to them...

Thank you. You really made my night.

Afterward, everybody went to the Kite & Key, a block away from the library, for food and drinks and conversation. Which is where the above photo of Lianna and me was taken by Marianne Porter.

It's Self-Promotion Wednesday! Is that a thing? No? Well, I'll make an exception just this once.

So far, I've gotten three reviews for The Iron Dragon's Mother, coming in less than a fortnight, and they've all been glowing.

Kirkus gave the novel a starred review and, among other things, said: The scintillating narrative, sprinkled with black humor, bulges with symbols and allusions to topics in science, alchemy, magic, folklore, mythology, fantasy/science fiction, and literature. Remarkably, all the major and most of the minor characters are female, not to mention an alluringly innocent protagonist... another bravura performance, with a surprise ending that, after a moment's reflection, isn't so surprising after all."

Publisher's Weekly  wrote:  This epic is full of carefully crafted lands, characters, and creatures, and readers will savor each page.

And in Locus, reviewer Gary K. Wolfe states that: “the irresistible appeal of Swanwick’s version of Faerie, along with his usual skill at drawing vividly complex and conflicted characters trying to solve a mystery whose stakes keep spiraling outward, lend the novel a density and texture that seems abit surprising, considering all the fun we’re having along the way.” 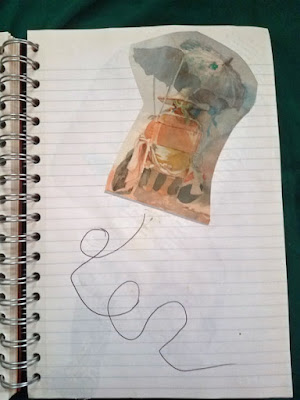 The image above is, if you look closely, of an old woman awhat might be a wheelchair, shaded by umbrellas. But I canted it to the side to make it suggest that she were lofting off into the air in a hot air balloon. Thus making it a picture of Helen V., the old woman who finds herself inhabiting the mind of half-human dragon pilot Caitlin of House Sans Merci. Much to Caitlin's annoyance.


Above: For those who came in late, my latest novel, The Iron Dragon's Mother, will be published in 13 days. To draw attention to this fact, I'm serializing the Image Book I made to help me imagine a strange world for the book.

Posted by Michael Swanwick at 2:33 PM