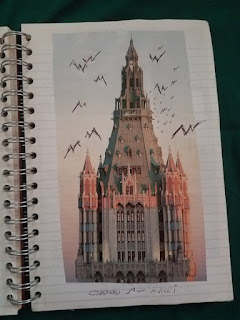 Again, this is a day late.

Shown above is Chateau Sans Merci, a major locale in The Iron Dragon's Mother. As I keep saying, these are impressions rather than representations. Here's how the chateau where Caitlin was raised is described in the novel:

Château Sans Merci was situated in the fold of the valley where graceful hills shaped like a giantess’ thighs met in a bosky thicket. Against this verdant backdrop, the dome and orange roof tiles of the château gleamed in the sun. The formal gardens surrounding the manor house, Caitlin knew from experience, swarmed with dragonflies, humblebees, fairies, and wasps. Not far below, the Amberwine emptied into a small artificial lake with a marble shrine to Astarte at the upper end and a decorative mill at the bottom. There was a dock on one side of the lake and a red lacquered moon bridge on the other giving access to a modest wooded island that the family used for picnics and the occasional midnight tryst

And here's how the novel's protagonist reacts to seeing exactly that from the limousine that has been sent to fetch her home:

It's not an easy business being the heroine of a fantasy novel.


Above: For those who came in late, my latest novel, The Iron Dragon's Mother, will be published in 10 days. To draw attention to this fact, I'm serializing the Image Book I made to help me imagine a strange world for the book.