Pictured above is one of Anne McCaffrey's dragons. Her dragons and mine have very little in common. Though the artist of the original cover of The Iron Dragon's Mother was very obviously told to make it look as much like one of her dragons as possible--and, so far as I can tell, nothing more about the novel at all. Which is why the cover shows a human figure that could be either male or female lying face-down in a forest glade, possibly sleeping and possibly wounded, in a kind-medievelish outfit but maybe contemporary with a gracile green dragon crouching either protectively or menacingly over the figure. (All credit to the artist for making the most of a vague assignment.)

But today I have something in common with Ms. McCaffrey. We're both on a list of the Ten Best Dragon Novels on The Portalist, which is the website for Open Road Media.  Since The Iron Dragon's Daughter ebook is published by Open Road, I'm guessing the rest are as well.

No matter. It's a Ten Best list and those are always fun to argue with. I personally think that R. A. McAvoy's Tea With the Black Dragon is an excellent choice. It's quirky, fun to read, and above all original. On the other hand, on the other hand, one book I would definitely kick off the list is...

Oh, come on. You didn't seriously think I was going to tell you that? I have to live in this field. 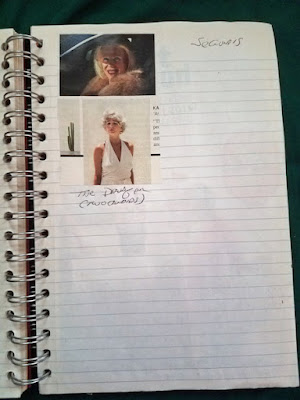 Those are not very flattering pictures of the Dowager, though they do capture a fraction of her glamour and her spite. She is a lot nastier and more dangerous than she ever lets show.

I have no idea what I meant by Segundis.


Above: For those who came in late, my latest novel, The Iron Dragon's Mother, will be published in 8 days. To draw attention to this fact, I'm serializing the Image Book I made to help me imagine a strange world for the book.
*

Posted by Michael Swanwick at 1:40 PM

The 'here' link wasn't dragonish at all.

Damnation! I checked it, too. But I think it's been corrected.