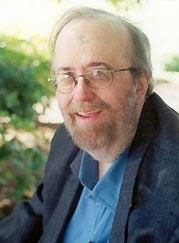 I'm heartbroken to have to share this with you.  Lucius Shepard is dead.

Lucius was a good friend and a hell of a great writer.  His curse -- and the reason that he wasn't a hundred times better known -- is that he had a special brilliance for short stories and novellas but found it almost impossible to work at novel length.  It's a brutal business trying to earn enough money to keep oneself alive writing only short fiction and the occasional article.  But through a combination of hard work, prolific output, and artistic brilliance, Lucius managed to do so.  I stand in awe of that.

There must be a thousand stories out there about Lucius.  He was a heavy drinker and, back in the day, a legendary user of drugs.  You only had to meet him once to know that he was haunted by personal demons, though I never did learn what they were.  Yet he had a great, though dark, sense of humor, and was a mesmerizing storyteller.  And he had a kind streak.  I remember him urging me to consider teaching at Clarion West:  "It's a heartwarming experience, Michael, helping these young writers.  It makes you feel like Mr. Chips."

But there was also that darkness.  I was in a bar drinking with Lucius once when a friend expressed her wish that she knew what came after death.  Lucius turned around and stared at her in astonishment.  "You want to know happens?  They dig a hole, they dump you in, and then they shovel dirt over you.  End of story.  Reincarnation?  Think worms."  You probably had to be there, but take my word for it, it was a hilarious performance, delivered with the emphasis and timing of a great actor, and self-mocking to boot.  But it was also a good example of how clearly and steadily he looked at those aspects of existence he found appalling.

Lucius was a major American writer.  He leaves behind a large and distinguished body of work.  My own personal favorite is The Dragon Griaule but others will favor Live During Wartime or The Golden or . . .

But I'll stop here.  Not because there isn't a lot more to be said but because it depresses the hell out of me to have to say it.  Instead, I'll tell a minor story of my own:  Years ago, I was in the West Village with Marianne in the White Horse Tavern, a place best known for being Dylan Thomas's favorite NYC drinking spot.  Marianne's wine and my whiskey arrived and I raised my glass in a toast:  "Here's to a very great writer who used to drink here . . . Lucius Shepard!  'Fifteen grams, I believe that's a record.'"

A very nice tribute. Thanks.

Thank you for that, Michael. It is a sad day, and that helped.

Lucius once told me that his failure to acheive fame and fortune was really just him getting back at his dad. That it was really self-sabotage. To illustrate the point, he told me a story about how he was offered a deal at the same time George RR Martin was in which a certain publisher would support him while he wrote an epic space opera series. Lucius turned the gig down, George didn't. I can't speak to the veracity of the anecdote. Lucius created his own reality, sometimes. But the kernel of truth at its center resonates.

Thank you Michael. Hey, didn't you teach Clarion my year?

I never met him, but fell in love with his words when I read one of his stories in a collection entitled In The Field of Fire...from there I tracked down Life During Wartime and The Jaguar Hunter and then Green Eyes...and subsequently anything that man published. RIP Mr. Shepard thank you for many years of amazing work.

I still remember reading "R&R" for the first time (twenty? twenty five years ago?). My jaw just dropped. It was full of death and life and darkness and light at the same time. I didn't know story like this was even possible... He was truly wonderful writer.

I only met Lucius a few times ... a book signing at Ziesing's old bookstore in Willimantic, CT, and a a few years later at a Readercon in Lowell, MA ... but he made an outsized impression on me in those few brief meetings. He was one of two writers (Stan Robinson is the other) collected and dedicated space to in my otherwise disorganized bookshelves. We lost a tremendous talent.

When I was editing New Dimensions, one of the stories I was most proud of publishing was Lucius's "Black Coral."

Marta, "Black Coral" was the first story that made me aware that a major talent had manifested himself among us. It is perhaps (I'd have to check to be sure) the chief of many accomplishments from your too-brief stewardship of New Dimensions.

Michael, Thank you for this lovely tribute to our friend.

Although he drove me crazy with his almost daily phone calls over the years (often asking for someones email address or phone # yet again--I once sent him a datebook for xmas but he never used it) I missed them these past several months since his stroke. He phoned, but not as often, and I more often phoned him. He had always hoped to write again and we all hoped he would too. No more stories, dammit.

Michael: Your words today, about our friend Lucius, and your words read four days ago, about our mutual pal, Ray Lafferty, loom larger and more heartbreakingly honest than I can express. You continue to grow as Magnificent Human Design.

I was in junior high and high school in the 1980s, so Shepard's career as a writer of science fiction more or less coincides with my career to date as a reader of the stuff. I grew into the form on his writing, and maybe he was growing into the form at the same time. Maybe that's part of my attachment to his writing. But I think it's more than that: Shepard wrote like what he was writing mattered to him. I believed in him, even if i had to read it a few times to get a sense of what it was I was believing in. There was a fierce honesty to it, and it was always worth going along where he went. He was truly one of the great writers, even if the world at large never knew it.

Thank you, Michael. You said it all in a few words.