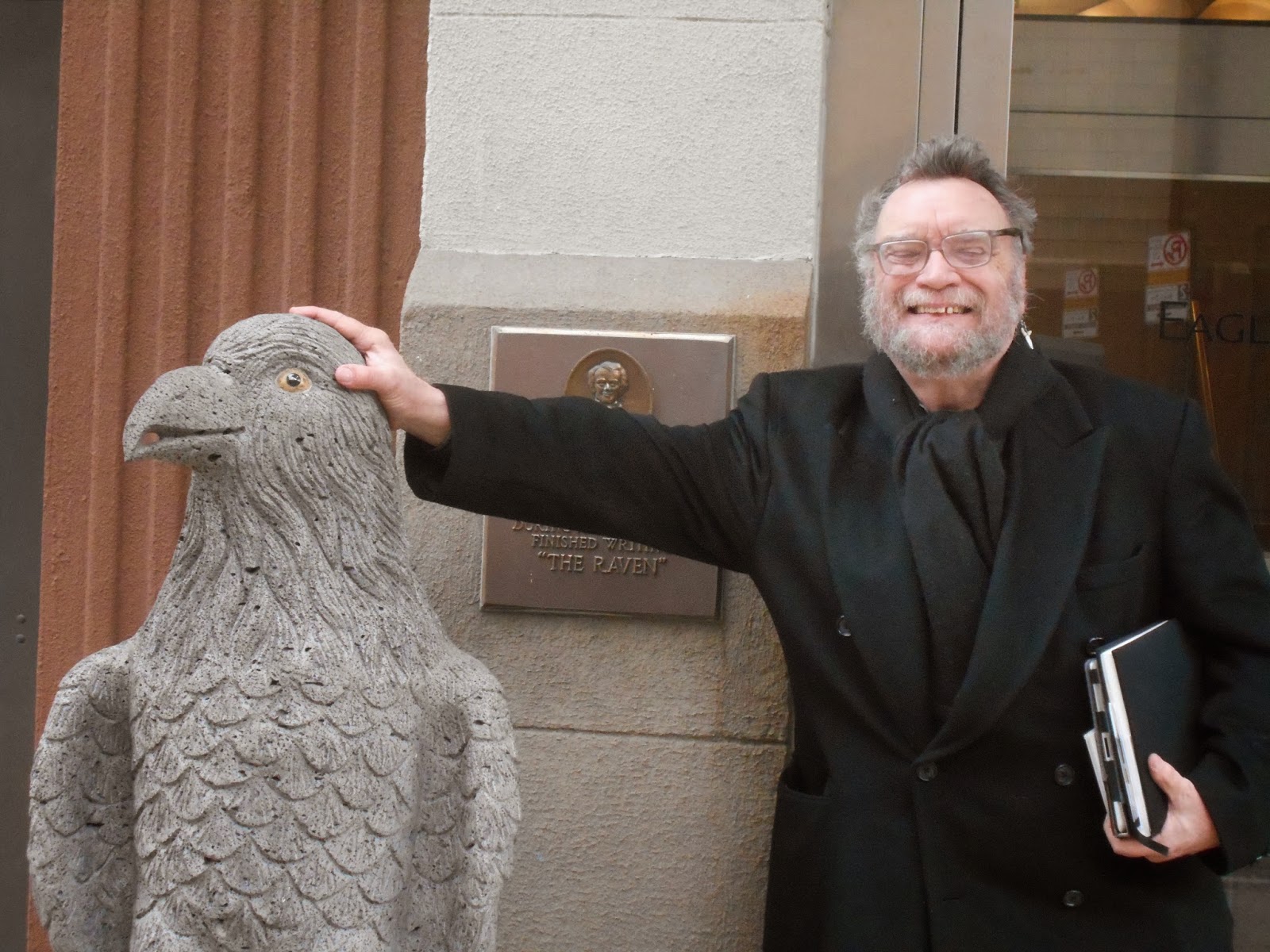 I began Monday by going to 84th and Broadway, where Edgar Alan Poe wrote "The Raven."  One of my particular hobbies is visiting every site where Poe wrote that poem.  I've been to the sacred site where this happened in Richmond, in Baltimore (well, one of them), in Philadelphia (the Poe House), in Wayne, PA (the General Wayne Inn, which following the murder of one owner by the other is now a synagogue), and several other places as well. I've got somewhere between a dozen and thirty-two more sites to go before my quest is done.

(In every one of those locations save the Poe House -- so far as I can tell -- Poe also scratched his initials.  It was one of his particular hobbies.)

From there, Marianne and I went to the Chelsea Hotel.  Forget Sid and Nancy, forget Bob Dylan, forget the rest of them.  Here it was that Arthur C. Clarke wrote 2001 in collaboration with Stanley Kubrick.

Next came the Flatiron Building, which was the first skyscraper in the world and is currently the home of Tor Books.  We talked serious literature and hot new writers with old friend and editor Claire Eddy.  Alas, publishing legend Tom Doherty was off on an agent lunch and so I didn't get to see him.

From whence we went off to 45th and Madison to the Roosevelt Hotel where Hugo Gernsback had his radio-television station, the second in the world.  Gernsback was an immigrant, a visionary, and a crook. He stiffed his writers while giving himself a salary of a million dollars a year, back when that was serious money.  He was living the American Dream while denying it to others.  Yet almost by accident, he created science fiction. Amazing Stories was responsible for turning science fiction (a term he created after his earlier and clunkier coinage "scientifiction") into a genre separate from general fiction.  And quite by accident his practice of including the addresses of those who wrote to his magazine with their letters made it possible for those correspondents to write directly to one another, thus creating sf fandom.

By chance, we arrived at the site of Gernsback's high-water mark as the St. Patrick's Day parade was winding down.  Two bands went by and then the final clutch of local Irish celebrities, sashes across chests, looking important and disgruntled.  A woman who had fallen behind the rest ran swiftly after them on heels so high I expected her to to pitch forward into the pavement.  But she did not, her fellow celebrities smiled to see her join them, and Marianne and I went back to Brooklyn, exhausted and happy.