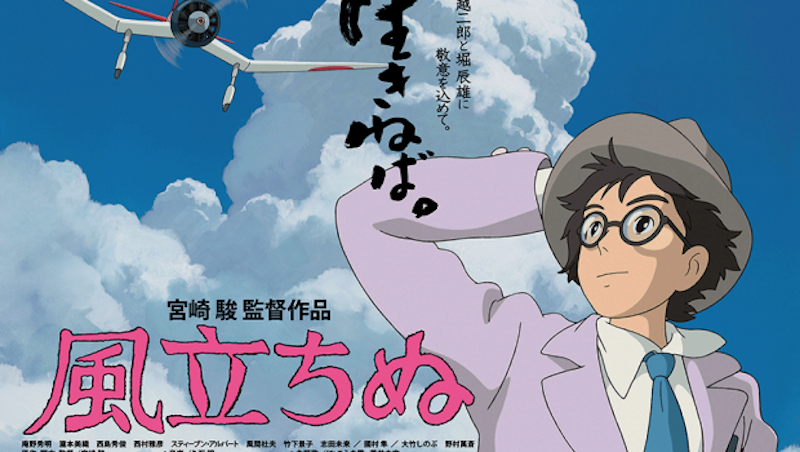 I went to see Hayao Miyazaki's new film, The Wind Rises, the other day.  It's important to rush out and see a new Studio Ghibli film as fast as possible because the distributor (Disney) never gives it much of a push or very long in the theaters.

And this is definitely a film worth seeing on the big screen.  My heart belongs to fantasy, so my favorite animated film is still Spirited Away, followed by Princess Mononoke.  But as animation, this may be better than either.  Nobody knows better how a red tin roof or wind in the grass or a dingy, poorly lit hallway should look than Miyazaki.  He is unsurpassed in his portrayal of everyday beauty.  And some of the crowd scenes are probably as detailed and varied in activities shown as anything that's ever been done in the medium.  Put this together with From Up on Poppy Hill, and you've got a great social (though not political) history of Japan for half of the past century.

There's been some controversy because The Wind Risesis a biopic, albeit one with a pacifist message, of Jiro Horikoshi, the chief designer of the Zero, a warplane that killed many Americans in WWII.  But since I have nothing original to say about that, I'll skip over it and go straight to what struck me most strongly:

As portrayed in the movie, Jiro Horikoshi was a talented young man with a strong imagination, in love with flying machines and particularly horrified by war and carpet bombing.  He is more observant and creative than those around him, achieves early and sustained success, and works with a large group of other talented individuals in order to create something extraordinary.  Thosehe works with are perfectly capable of creating a good product.  But with him at the helm, the end result is invariably better than it would be without him.

Which is to say that The Wind Rises is a Mayazaki's hidden autobiography.

I recommend it.  But then, I recommend pretty much everything the man has created.

The thing that struck me was that the people, being drawn in what I would call a conventional anime style, are the least realistically drawn things on the screen. Then come the airplanes, which I would say were only semi-realistic, not highly realistic. The backgrounds, houses and trees and hills, are drawn more realistically than that, I thought. And finally when there is water on screen, it is rendered almost photorealistically.

I thought it was an odd artistic choice, not to have a more uniform level of realism.