Our First Third Of A Century 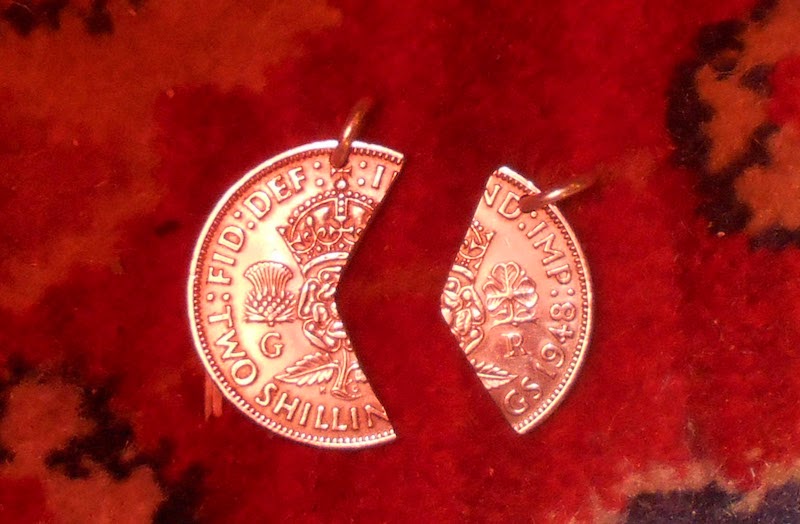 Saturday, Marianne and I reached a milestone in our lives -- thirty-three years and four months of marriage.  We have now been man and wife for over a third of a century

We had been thinking of having a large party.  But because Marianne's mother died in January (at age 103, so it didn't come as a surprise) and Marianne's still in mourning, we had a smaller gathering of close friends whom we've known for many decades.

In keeping with the low-key nature of the celebration, I commissioned something simple to give my beloved:  A silver coin cut into a one-third piece and a two-thirds piece.  Why a coin?  Well, in The Iron Dragon's Daughter, there's this explanation by Jane's one true love:


“… you know how if you take a coin and break it in a vise and throw half in the ocean and keep the other in a dresser drawer, they'll yearn after each other? One day you're taking out a pair of socks and you knock the drawer-half onto the floor without noticing. Somebody kicks it toward the door. A week later, it's half a block away. And the other half meanwhile, a fish swallows it and is caught and gutted and the entrails thrown into the trash, half-coin and all. So that maybe a couple of months later, it might take a century, you'll find the two lying in the sand at the verge of some nothing-special stretch of country road, nestled together.


I was thinking of Marianne when I wrote that, and it still seems true to me today.

The coin was cut by master jeweler Janet Kofoed.  Her usual work is much more extraordinary (and, for what it is, scandalously underpriced) and can be seen here.

Just beautiful. All of it. (Except the mourning.)

Congratulations and thanks for the tip on the jewelry. Beautiful stuff. Great for gifts.