Geek Highways, Day 1: From the Blob to the Big Bang 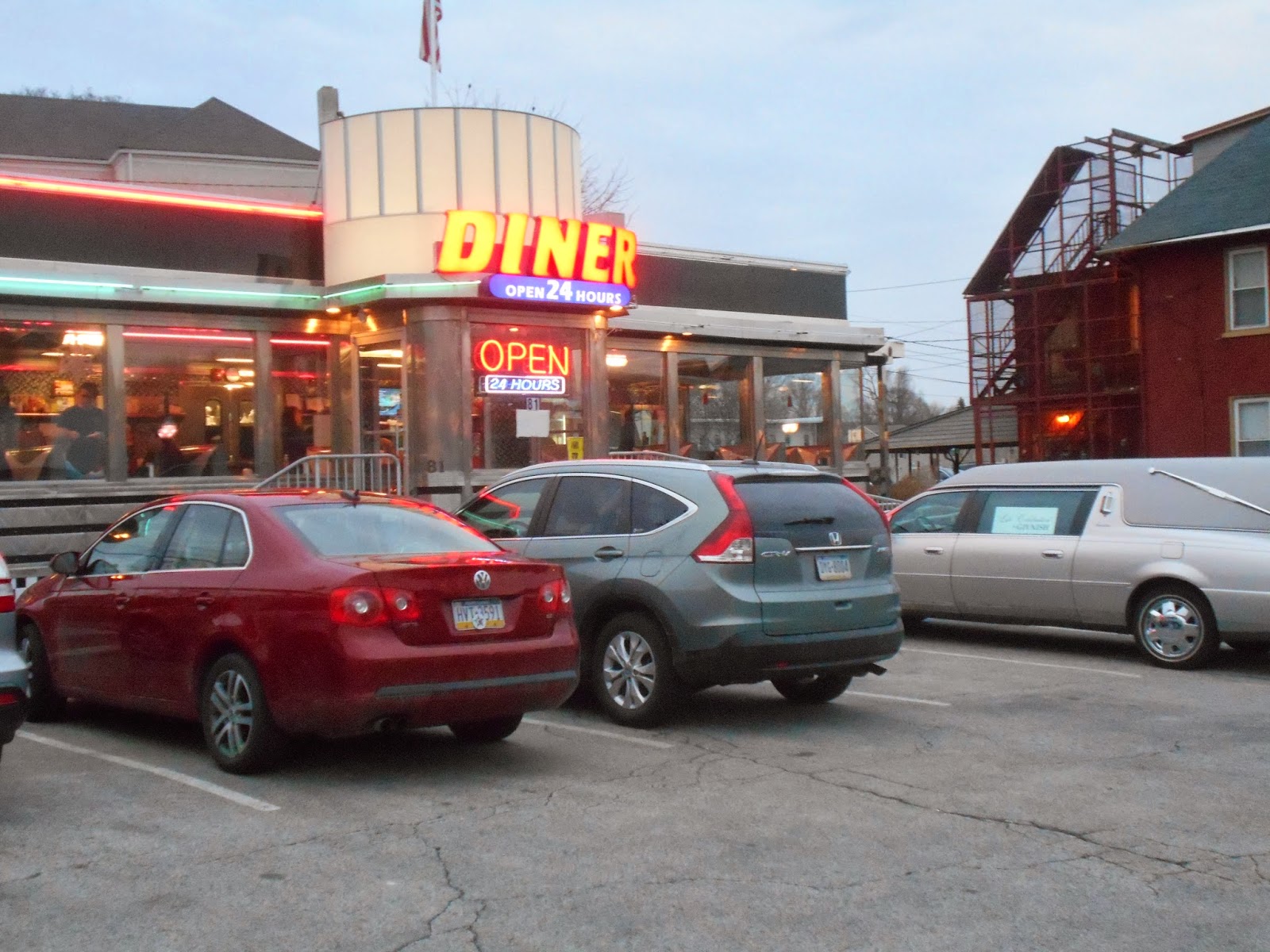 We left Philadelphia before dawn.  Marianne and I drove west on the Schuylkill and then through a series of sleeping bedroom communities, nestled into the wooded hills to the northwest of the city, out to Downingtown.  Along the way we passed Merion where, at the General Wayne Inn, Edgar Alan Poe scratched his initials into a windowsill and wrote "The Raven" -- two activities of which, by testimony of all the places claiming the honor, he was inordinately fond.

We stopped for breakfast at the Downingtown Diner, where parts of the 1950s sci-fi classic The Blob were filmed.  Though the current diner is a replacement for the original which... well, nobody seems perfectly sure what happened to it.  It's gone, anyway, and only the basement is the same as in the movie.  The waitstaff there were cheerful and  genuinely friendly.  Asked if they got a lot of tourists, our waitress said, "More or less.  Some more than others.  Some are all 'Oh, this is so exciting!' and 'Can we see the basement?'  No, they can't."

I ordered the Blob of a Mess (scrambled eggs mixed with hash browns, green peppers, and chopped ham, covered with cheese) with toast, coffee, and juice.

Our next stop was Phoenixville, where the Blob attacked a movie theatre full of teenagers.  Once a year, the Colonial Theatre has a Blobfest whose events include a Run Out from the main door of the theater, a recreation of what may be the least convincing shot of the entire movie.  It always sells out fast.

The theater has a respectable history.  It opened in 1903 as a vaudeville house and such entertainers as Harry Houdini and Mary Pickford performed there.  In 1903 it showed its first silent movie, and in 1928 its first talkie, The Jazz Singer.  Coming soon, according to the marquee, is the classic horror cheesefest, The Tingler.

From Phoenixville, we drove back through Philadelphia and across the Ben Franklin Bridge to Haddonfield, New Jersey, where the first near-complete dinosaur skeleton was discovered.  Today, the farm where Edward Drinker Cope spent ten very productive years has disappeared under a genteel residential neighborhood.  But traces of it -- the farmhouse down by the pond, a tenant house set kitty-corner from the current street -- remain to be detected by the discerning eye.  There is a memorial plaque by the stream and a mile away in the historic part of town, a life-sized bronze Hadrosaurus foulkii by sculptor John Gionotti.

After a long trek through deepest, darkest, mallest New Jersey, the business parks and fields of Phragmites give way to the Pine Barrens.  There we search out the Carranza memorial, funded by the small contributions of countless Mexican schoolchildren.  Emilio Carranza, "the Lindbergh of Mexico," died in a crash there in 1928 while on a good will mission to New York City.  He was only twenty-three.

Then it was time for lunch.  We took a detour into Roadside America and ate at Mighty Joe's Gas Grill & Deli, which has an 18-foot high fiberglass gorilla outside, clearly modeled on Mighty Joe Young and bought years ago from an earlier roadside attraction.  Sadly, the owners have turned it into a memorial for a dead son, a bodybuilder who died young and had been nicknamed "Mighty Joe."

From Shamong, then, to Lakehurst.  The visitors center was closed and it was not possible to get into the dirigible hangar but we could see it from the road, and the sky as well -- the brave blue sky in which the Hindenberg burned, putting an end to the Age of Airships for all but a very small number of lighter-than-air craft and the imaginations of children and dreamers everywhere.

Our last stop was Holmdel, where after a great deal of wandering about, we finally found the Holmdel Horn, one of the great obscurities of science history.  The Horn was a directional antenna built to support NASA's Echo Satellites.  Here, in the early 1960s, Arno Penzias and Robert Woodrow Wilson were studying emissions from the Milky Way and found themselves unable to account for small but persistent background "static."  After all other possibilities had been eliminated -- they even spent hours clearing out nesting pigeons from the Horn and cleaning away their droppings -- they came to the realization that they were listening to the background radiation left over from the Big Bang.

This was one of the greatest scientific discoveries of the last century and possibly of all time.  It established that our universe was born -- and that someday it will die.

The Holmdel Horn is, alas, on Alcatel-Lucent (what used to be Bell Labs) property and can only be glimpsed from a distance.  But it is an important relic of science.  Just glimpsing it was privilege enough.


Above:  I'll insert photos into these entries as soon as I can find a fix for a hole in my clutch of electronic communications devices.  It may take a few days.