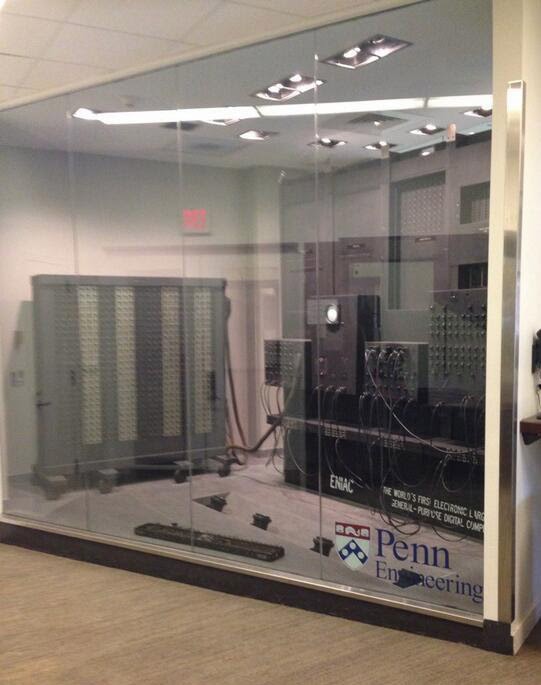 Tomorrow I leave at dawn in search of Geek America.  Not that I couldn't do that in the city that's come to be known as Geekadelphia.  Philadelphia has more than its share of literary and scientific landmarks.  Heck, our secular saint is Ben Franklin, the first American scientist to gain international renown.

But if I didn't leave, it wouldn't be a road trip, and so off I go.

Before going, however, I made a symbolic trip to Moore Hall in the University of Pennsylvania, where four of the original forty panels comprising ENIAC are on permanent display.  ENIAC was the first large-scale general purpose electronic computer.  It's the "general purpose" part that's most important -- it was the first electronic computer that could be put to any task that its programmers desired.  It could be programmed by physically rewiring its components.  A clunky task by today's standards but one that made possible mathematical calculations that simply could not be performed before then.

Back when I worked at the Franklin Institute Research Laboratory as a lowly information analyst, one of my bosses kept a box of vacuum tubes from ENIAC under his desk.  How I wished I owned one!  But of course simply owning one would have meant nothing.  It's having a reason for owning one that means all.

I savor computer nostalgia, and this is a particularly nice example. Sleep on, ENIAC! We will wait until you awaken.

And, oh, yeah, Michael and Marianne, journey well! Report back!