Geek Highways, Day 7: From Humbug to the Mesozoic 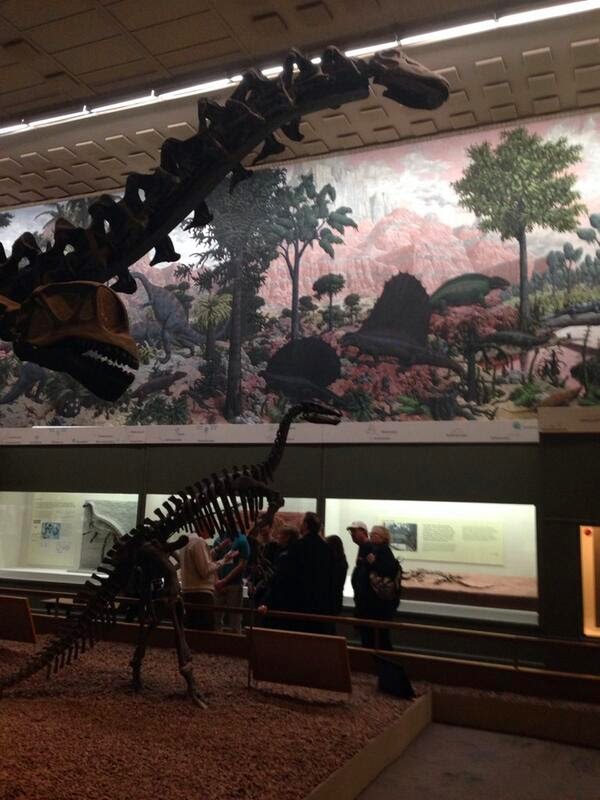 From the Empire State, Marianne and I drove eastward, into Connecticut.  Bridgeport was home to Elias Howe, the inventor of the sewing machine and Harvey Hubbell, the inventor of (among other things) the electric plug and the pull-chain light socket.  But its best-known citizen was the showman P. T. Barnum.

Barnum was the self-styled "King of Humbugs," and with good reason.  He perpetuated and made good money off of such frauds as the Fiji Mermaid and the Cardiff Giant.  But aside from such deceits, he was famous for giving the public good weight for their money.  His shows and museums were chock-full of wonders, marvels, and things that people wanted to see.

So it's particularly sad that the Barnum Museum is still closed for repairs from damage caused by a tornado several years ago.  I pressed my nose to the glass, marveled at the building's external decorations, and with a sigh moved on.

The day picked up, however, some miles down the interstate, Marianne spotted a sign for the Pez Information Center.  Which is something we'd passed by many times over the decades en route to someplace else and never made the detour to.  This time, we did -- and discovered that the spirit of P. T. Barnum is alive!  Because the Center is that wet dream of capitalism, a gift shop that charges admission.

The admission was not expensive, however, and the PIC is in a low-key kind of way a hoot.  There are a number of educational displays and a window overlooking a section of factory where, weekdays, Pez candies are made.  But the chief attractions are the displays of classic Pez dispensers:  Astronauts, American presidents, Halloween creatures, pretty much every Disney character ever put to film, and much, much more.  It's a strangely charming experience to pause for half an hour to admire something as ephemeral and unimportant as a candy dispenser.

On the way out, I was tempted to buy the set of Pez dispensers immoralizing the cast of The Lord of the Rings.  But I quickly came to my senses and a few minutes later was on my way to New Haven and the Yale Peabody Museum of Natural History.  The Peabody is not a particularly large museum but it has a world-class collection and some of the most amazing fossils you'll ever have the pleasure to gawk at.  Many of them were collected by legendary paleontologist Othniel Charles Marsh, today remembered almost as much for his fierce rivalry -- known as the "Bone Wars" -- with Edward Drinker Cope.

I could go on for hours about the wonders of the Peabody.  But its crown jewel may well be the single most influential piece of scientific illustration ever, Rudolph Zallinger's 110 foot long mural, The Age of Reptiles.  The mural covers all of the Mesozoic with plants and creatures from the earliest era, the Triassic, at the right-hand side under a dawn sky, the Jurassic in the center, and the Cretaceous at the left in the gathering dusk.  A tremendous amount of information is encoded into the mural -- it took four and a half years to create -- and though some of the science has been superseded, that hardly matters.

What matters is that the mural created more scientists than will ever be tallied up.  In the early 1950s, it was reproduced in Life magazine as a fold-out and millions of children were exposed to a vivid, engrossing vision of the prehistoric past at its most glamorous.  Many, many paleontologists have testified that it was responsible for their choice of careers.  Marianne tells me that it made her a scientist.  And I'm sure it had a good deal to do with me becoming a science fiction writer.  The importance of that single work of art cannot be exaggerated.

Years ago, I helped Robert Walters and Tess Kissinger put up the paleoart show at Dinofest.  Among the astonishing paintings displayed there was the seven-foot-long cartoon for the mural.  I was one of several people who carried the painting in, laid it down on the ground, and then undid the protective wrappings it had been shipped in.  When it was revealed, we all knelt before it and bent down to examine its astonishing detail.

Of course, as I'm sure you knew but left out for smoother flow, the Cardiff Giant never belonged to Barnum -- the owners (a syndicate) refused to sell it to him. Nil desperandum. Barnum simply had a replica made and displayed it as the only genuine Giant. The syndicate sued; long story short, the whole thing ended up with the Giant's creator's admission that the original was a fake, too.

The legendary palaeontologist Othniel Charles Marsh whom you mention later had from the first doubted its authenticity, calling it "a most decided humbug". It was largely religious fundamentalists who had defended it. Plus ça change. But this ties up the Barnum to Othniel flow of your blog post very nicely.

Sidenote: It was evidently one of the owners of the Giant who, seeing the crowds lining up to look at Barnum's fake fake giant, uttered the famous "There's a sucker born every minute" line that is now generally attributed to Barnum himself.

Barnum's Fiji Mermaid was also, of course, a fake. When that hoax was uncovered, he with a staggering display of swift-thinking showmanship simply changed the signage and continued to exhibit "her" as the one and only genuine fake Fiji Mermaid.--Mario R.

"On the way out, I was tempted to buy the set of Pez dispensers immoralizing the cast of The Lord of the Rings."
Bit of a Fraudian slip there, Mr. Swanwick...

The Zallinger mural as a gateway drug to science...
I wonder how many scientists of an earlier generation were steered that way because of sitting through the Stravinsky sequence in Disney's "Fantasia"?