Why We Need More Portuguese Restaurants 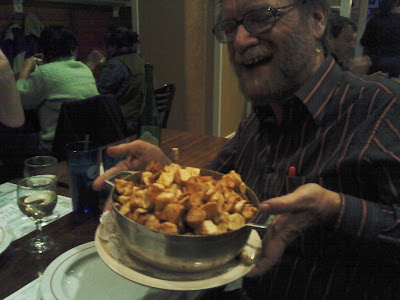 After Boskone, our friends Gail and Rob took Marianne and me to Antonio's Restaurant ("Uma Casa Portuguesa") in New Bedford, Massachussetts.   "The more Portuguese the dish sounds, the better it'll taste," they told us.
God yes.  I ordered the Carne à Ribatejana (marinated pork stewed with littlenecks and shrimp, topped with cubed fried potatoes) -- that's it up above -- and it was delicious.  Also huge.  Rob took a photo on his phone and sent it to his daughter, who texted back, "That's big enough to have its own zip code."
It turns out that the Portuguese expect their restaurants to provide an abundance of food.  So much that you're expected to bring the bulk of it home to eat later.  Gail mentioned one Portuguese-American friend of hers complaining that she'd gone to a restaurant and been given such skimpy portions that she only got two more meals out of it.
From our combined leftovers, Marianne and I got four dinners and two lunches.  Antonio's didn't skimp on the ingredients either.  Rob's paella had half a lobster buried in it.  That's why it cost eighteen dollars.  My own more modest meal cost fourteen.
Above:  Man, just look at that thing!
*
Posted by Michael Swanwick at 8:44 AM

I'm fortunate enough to have visited Portugal twice; a honeymoon (Wife #1) and for business. The Portuguese are terrific eaters - a splendid compliment in my family - and they firmly believe good food takes time to prepare and enjoy. My opposite number to me to lunch and after squinting at the menu, I asked what was good. Eyebrow arched, he asked, "What do you see in front of everybody here?" (There may have been fifty other diners). A cast-iron skillet with eight ounces of beef tenderloin swimming in a 1/2 inch of melted butter. For which it was to die.