The Sleep of Reason Revisited 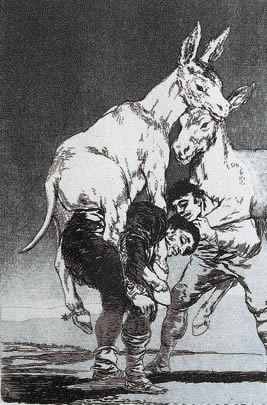 Monday, Marianne and I jaunted up to the Big Apple to visit my friend and sometime-publisher Henry Wessells, who works at that renowned occasion of sin, James Cummins, Bookseller.  (Click here to begin browsing and subsequently resolve to become so very rich that you can put the establishment on speed-dial.)

I didn't ask and so I can't even imagine how much such a thing cost (Goya himself only sold 27 sets before the series got him in such hot water that the king had to bail him out by buying all the remaining etchings and the plates as well).  But whoever winds up buying it will get his or her money's worth.

The first prints are always the cleanest, of course, and most of the reproductions you've seen are based on later editions.  (The last of which was in the twentieth century!)  Plus, there's details lost in even the finest reproductions.  So it was a treat to be able to turn the pages by hand -- such good paper! -- and pore over the fine work that Goya did.

Years ago, I created a series of flash fiction, one for each plate, for Eileen Gunn's late and lamented online SF e-zine The Infinite Matrix.  It was a revelation to lean close to the real thing and see all the fine detail I'd missed out on, working from a paperback.  In several of the plates, what looks like murky shadow revealed itself to be a shadowy, supernatural figure, possibly death, bending low over a cluster of oblivious fools and scoundrels.  If only I'd seen him then, I'd've worked him into the series.

It was a delightful experience,   Those who haven't seen The Sleep of Reason, can find it here.


Above:  Prick the Donkey at play.  Prick started out as a parody of a certain Republican president and quickly became the most lovable character in the series.  Go figure.

There's a copy available for only $200 from Amazon, but it's certainly not a true first.

The Dover edition is $10, while Wesleyan offers all 80 images for viewing online, which is NOT THE SAME THING, but nice nonetheless.

Will we ever see your collaboration between covers? It's a brilliant collection, both horrifying and hilariously funny.

I'd guess that the Amazon item is not printed from Goya's plates, or that fact would surely be mentioned.

I'd very much like to see The Sleep of Reason in hardcopy. I just haven't gotten around to doing the work it would take to make that happen.

I was interested to see your point about three undiscovered Mervyn Peake letters as I'm involved with the Peake Estate. Were these original letters? Or were they something found in a book. If you could let me know I'd be grateful.
Thank you.
Alison Eldred

They were original letters. I believe, however, that that somebody at the estate was consulted about them. in order to establish that they were both authentic and previously unknown.

Sorry, my brain seized up at
"Mauldin erotica".
I still remember so many of his cartoons. His obits were Olympian (besides Kennedy, Eleanor Roosevelt and Winston Churchill come immediately to mind).
But it had never occurred to me he might have done, um, limited editions . . .