Saving the World, One Cat at a Time 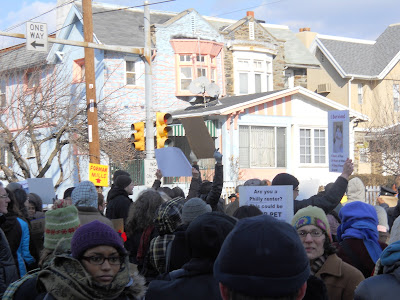 God, did this take me back!  Saturday I took part in a protest.
Here's the situation.  There was a fire in a West Philadelphia apartment building a few weeks ago.  The tenants were cleared out, the building fenced off, and plans made to raze the thing to the ground asap.  However, there were still pet cats living in the building -- they were seen in the windows.  And, strangely enough, the building owners wouldn't let the Pennsylvania SPCA into the building to rescue them.

So it was out on the street again to do my small bit.

It really took me back to the Sixties.  Where the protests mostly consisted of people milling about while one or two individuals with bullhorns tried to get everyone to act in disciplined unison.  The times were certainly changing.  But they weren't as vivid as they're portrayed as being.


And since you asked my opinion of this year's Oscar-nominated short animated features . . .

I went to see an omnibus movie of Oscar-nominated animated shorts.  Tremendous fun, and I have to join in with pretty much everybody else in judging that the two chief contenders for the award are Madagascar A Travel Journal and The Lost Thing.

How good are they?  So good that it's ridiculous to compare them.  Madagascar is beguiling, near-plotless, visually innovative, endlessly inventive, and great-souled.  The Lost Thing is, as we all know from Shaun Tan's book The Arrival, surreal, melancholy, hopeful, involving, well-plotted, endlessly inventive in a totally different manner from the first film, and humane in a way that we hope someday to achieve ourselves.  I'm a plot guy, so if I had to choose I'd give the edge to The Lost Thing.  But I don't have to choose.  I recommend them both.

And the film too, if you're lucky enough to be in a city where it plays.

There were some nice animated shorts at the Seattle Science Fiction Film festival as well. One of them, Astronomer's Sun won the grand prize. My wife and I were more partial to Zero. Wonder Hospital was easily the most surreal and disturbing. If none of these even got an Oscar nomination, I'd love to see what Oscar material looks like.