And I'm in (Forthcoming) Print Again! 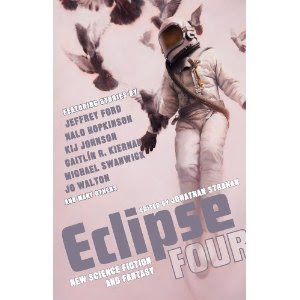 My pal, Jeffrey Ford, has just released the table of contents for Jonathan Strahan's anthology Eclipse (number) Four.  How he got it, I don't know.  But it was picked up by SF Signal, so it's not exactly a secret anymore.

And here it is:

“Slow as a Bullet”, Andy Duncan

“The Man in Grey”, Michael Swanwick

“The Vicar of Mars”, Gwyneth Jones

“The Double of My Double Is Not My Double”, Jeffrey Ford

That's one damn fine lineup.  But of all the stories in the anthology, "The Man in Grey" is best.  Because I wrote it.

The other authors may, of course, disagree.

I love the company we're in.

Is your pal "Geofrrey Ford" any relation to the "Jeffrey Ford" whose name adorns the cover?

Correction made. Thanks, Ken.

I must have momentarily confused Jeff with Geoff Ryman. An easy mistake to make. The two are practically twins.

What a great table of contents! I look forward to "The Man in Grey" and the rest of the stories -- except my own, 'cause I've read that one.

But Michael, you are being far too modest. My story, "Thought Experiment," is, as you know, based on a detailed description you sent me of one of your dreams. So you have somehow sneaked a second story into Eclipse Four. Very clever, Mr. Swanwick.

I'm honored to be alongside y'all!

So that's a total of fourteen writers of whom only four are happy to be in each others' company?

Ah, we few, we happy few, we band of brothers! And feminist sisters.

Maybe we're the only ones who search on our own names. No, that can't be.