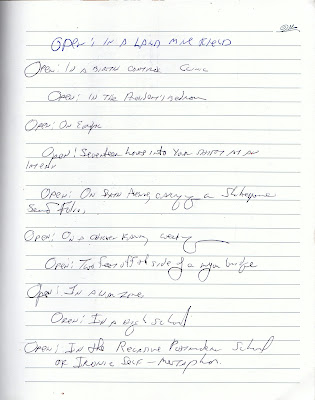 A writing exercise.  I suspect that I was putting all my creative energy into writing Dancing With Bears, and so scribbled down short outbursts of Anything Else.

Here's what it says:

Open:  In a land mine field

Open:  In a birth control clinic

Open:  In the President's bedroom

Open:  Seventeen hours into your shift as an intern

Open:  On a chicken ranch, weeping

Open:  Two feet off the side of a major bridge

Open:  In a war zone

Open:  In a high school

Open:  In the Recursive Postmodern School of Ironic Self-Metaphor

You can see me sweating to come up with these, and you can see the point where I got sick of the whole thing and tied it off at the end.  But  I think it would be a pretty good exercise for a new writer:  List eleven varied places or situations to open a story with.  Then write a one-page opening for each.  I'm sure that if I tried it myself, I'd find a live story before I reached the end of the list.