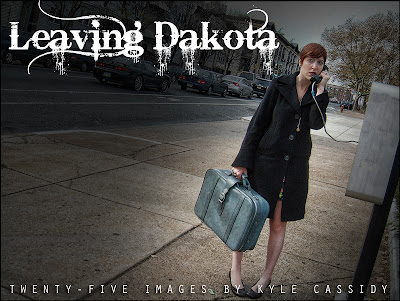 This is cool.  Marianne and I are putting on an art exhibition.  Photographer Kyle Cassidy, has created a show of twenty-five strange and evocative images, very much like stills from an unmade movie.  The prints are snapshot-sized and the whole show can be fit into a brown envelope and mailed across the country and around the world for volunteers to put on . . . in community centers, in their garages, wherever.

Marianne and I are putting it on in our room at the Boston Westin Waterfront tonight from 8 p.m. through 10 p.m. and from 6 p.m. through 8 p.m. tomorrow.  If you're going to be at Boskone, why not drop by?  We'll be serving petrodoodles.

I'm on the road again.  On my way to the above-mentioned Boskone.  As I requested, I'm going to be on lots and lots of programming.  And at the exhibition, of course.

The title of the first Darger & Surplus StarShipSofa podcast on How to Run a Con is "First Lesson."  Next week's expisode is "You Can't Cheat an Honest Man."

And, yes, as a friend of mine observed, Gregory Frost and I were having far too good a time being Darger & Surplus.  Wouldn't you?

Mark asked about the new Darger & Surplus yarn ("Tawny Petticoats") I'm currently dream-deep in.  Is it set before or after Dancing With Bears he wondered?


Okay, here's the context:  Darger & Surplus are engaged on an inadvertent trip around the world.  After a great many adventures in Europe, some few of which I refer to in the stories to date, they finally arrive in Moscow.  There the novel occurs.  But afterward they continue onward, through Siberia, Tibet, China, maybe even Japan . . . and on to America.  They must inevitably visit the Demesne of Western Vermont, where the secret Surplus has been hiding will come to light,  Ultimately, they must return to England, where Darger was born.

"Tawny Petticoats" is set in New Orleans.  So now you have some notion of where it lies within the (at this point non-existent) canon.

Mark also asked if the story was being written on commission.  No.  It is not true, as unpublished writers fear, that name writers can sell anything, however limp, to the magazines.   But after you've gone a hundred stories without a single rejection, you come to be confdent that the next story will sell, provided only that it is a good story, somewhere.  So I'm writing it without a current sponsor.

I say that not to brag, but to encourage you.  Write a good story.  It will sell.  This is the law and there is no other.