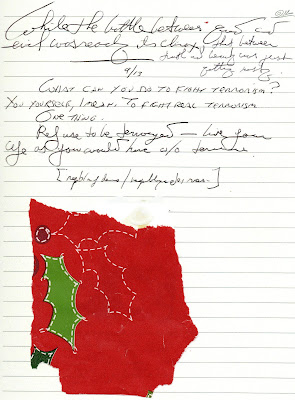 First, a touch of whimsy:

While the battle between good and evil was reaching its climax, that between truth and beauty was just getting nasty.

Then, serious for a moment:

What can you do to fight terrorism?  You yourself, I mean.  To fight real terrorism.

Refuse to be terrorized.  Live your life as you would without terrorism.

This is an obvious truth, which may be why I never did anything with the thought.  On 9/11, all civilian air traffic in the US was grounded.  9/13 was the date it resumed.  I was on the first plane to leave Philadelphia that day.


Finally, a censored bit.  Nothing scandalous.  But I'd torn a small fantasy illo out of a magazine and written under it my analysis of its aesthetic faults.  I'm not about to hold somebody up for scorn publicly, however, when all they did was fail to be a better artist than they were.  Shakespeare was guilty of that too.  Though, admittedly, on a much higher level.