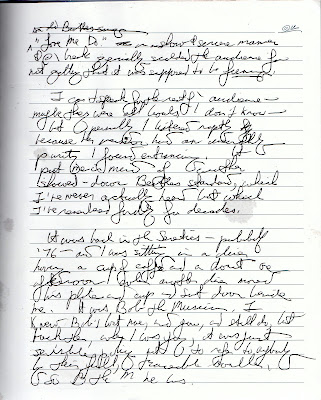 The story about Bob the Musician, continued.  So I wrote it out, after all!

... "Love Me, Do" in a slow and serene manner, and at the break genially scolded the audience for not getting that it was supposed to be funny.

I can't speak for the rest of the audience -- maybe they were boobs, I don't know -- but personally I listened raptly because her rendition had an unearthly purity I found entrancing.  It put me in mind of another slowed-down Beatles standard which I've never actually heard but I've remembered fondly for decades.

It was back in the Seventies -- probably '76 -- and I was sitting in a diner having a cup of coffee and a doughnut one afternoon when another diner moved his plate and cup and sat down beside me.  It was Bob the Musician.  I knew Bob's last name, mind you, and still do, but back then, when I as young, it was just sensible policy not to refer to anybody by their full, traceable moniker.  So Bob the Musician he was. ...