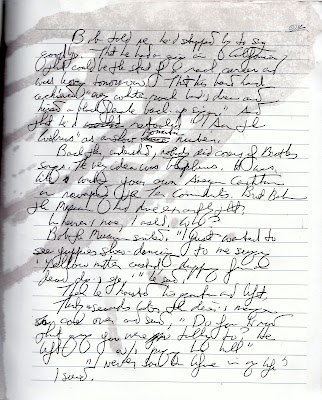 The saga of Bob the Musician finished at last!

Bob told me he'd stopped by to say goodbye.  That he had a gig in California that could be the start of a real career and was leaving tomorrow.  That his band had achieved "every white rock band's dream and hired a black female back-up singer."  And that he'd retooled "I Am the Walrus" as a slow romantic number.

Back then, understand, nobody did covers of Beatles songs.  The very idea was blasphemous.  It was like writing your own American Constitution or revamping the Ten Commandments.  But Bob the Musician had done exactly that.

Bob the Musician smiled.  "I just wanted to see yuppies slow-dancing to me singing 'Yellow-matter custard dripping from a dead dog's eye,'" he said.

Then he hoisted his guitar and left.

Thirty seconds later, the diner's owner came over and said, "Do you know that guy you were talking to? He left without paying his bill."

"I never saw him before in my life," I said.

That hideous ugly stain could be anything.  I spill things a lot.  But let's say it's wine.  More bohemian that way.